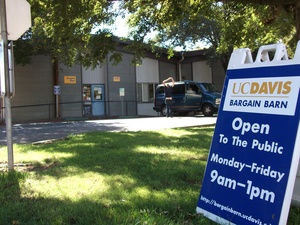 Aggie Surplus, formerly known as Bargain Barn, serves as UCD's clearinghouse for items that University Departments no longer need but deem too valuable to throw away. Items are first available to other departments, then to the general public at the asking price and lastly they go to open bid. They have a bag check policy that may be an issue for shoppers who arrive on bike with a backpack. 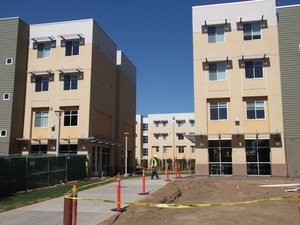 Wall & Potter Halls, across the street from Aggie Surplus

They sell a ton of stuff ranging from microscopes to computers to operating tables. They have even sold such items as old Unitrans buses, arcade games and an old climbing wall from the Rec Hall. A list of items available to the public is on their website. Sometime in 2007 they got a new pretty website on their own subdomain of ucdavis.edu, previously they were part of the old Materiel Management website.

University policy dictates the process by which any department can dispose of surplus material. Aggie Surplus works to assist campus departments in that process.

If you want computer stuff, however, the barn can offer a few good deals. When campus computer labs replace their machines large numbers of perfectly good machines go for sale through Aggie Surplus for excellent prices. These machines may or may not be bundled with a screen. Expect the hard drive to be cleanly wiped, though in the past many were sold that were full of information. 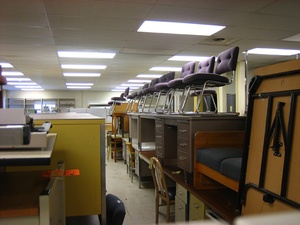 Inside the depths of the barn

Each selling department sets their own prices, so you may see two items that are the same sitting next to each other with vastly differing asking prices. If you see something you like you can always check to see what it is selling for on eBay and then come back and use that information to place a bid.

Trivial or extremely common items are generally just hauled out to the shelves and given undated bargain barn tags, or no tag at all. Usually the UC Davis Property Tags are removed from items, but some slip through.

Departmental Sales are sales made to other departments at the asking price during the first period of availability, generally this is the first 14 days, but the timing may vary.

Public Sales at the asking price are made if the item doesn't sell to another department and this period also generally lasts 14 days.

Open Bid is usually the period when items have sat for 28 days. The public is allowed to submit offers on the item, which the Barn (or rather the UCD department selling the item) has the ability to accept or refuse. This is where the vast majority of bargains are had. The lowest bid accepted usually is $5, because of the cost of processing the paperwork on the item.

Some items go directly to closed bid with a minimum bid and a fixed closing date. These are generally larger items like hockey rinks and mainframe computers.

The barn accepts cash, credit, and (for items under $100) personal checks. All items are "as is, where is." Test it before paying, and be ready to haul it away. This is very important to consider when you are bidding on a large safe or a piano.

Read a feature story in a July 2010 blog post by Davis Life Magazine.

2004-11-04 16:42:43   Just a note to those bargain hunters Don't let the name fool you, this 'Barn' mainly has large surplus department supplies, i.e. ancient 1990s computers, filling cabinets and an array of obsolete electronics. If you want a fubsy sofa check out the other Thrift Stores in Davis. However among those items that reach open bid there can be some real deals. —MarionEveridge

2008-01-06 10:13:11   What Marion said. Also, if you bid on an item, keep careful records of time, date and person you're dealing with. I placed a bid on an open bid item that was on the shelf, came back the next day and found it had been sold to someone else for the same price after I left. Another friend of mine, a surplus dealer, refuses to bid at the Bargain Barn because he believes he's been cheated out of items that he was the legitimate low bidder on. —JimStewart

2008-01-06 11:12:32   They sell some crazy stuff. At the moment, they're selling a cogeneration plant for $425k! (SEALED BID: COGENERATION PLANT (INCLUDING COMBUSTION GAS TURBINE GENERATOR & HEAT RECOVERY BOILER) For some reason, it's under the "Microscope" category. —EdWins

2009-01-26 18:23:30   I work at the Bargain Barn and I can honestly say that there are crazy deals here. Not many students know about this place because we don't advertise, but as expected, you have to LOOK for the BARGAIN. Yes, we have "ancient 1990's" computers, but they are mostly $5 each. Yes, we also have boxes and stacks of varying electronics, from $7.50 speakers, to $5 apple keyboards, to $1 phone chargers, to the newer models that sell out the first day they are available to the public. As for JimStewart, it is not a matter of the lower bidder, but of who had bid first. For example, if someone bids $100 for an item at 12:00 PM, but there was an unprocessed bid at $150 from that morning at 9:00 AM, that item will go to the first bid. There is no favoring at the Bargain Barn - we keep careful records of our bids in filing cabinets. —tuminator

2009-02-04 10:21:12   I am one of the newer employees, so I just wanted to assure you that our system has been modified. But, regardless, we apologize for any inconveniences to you or your friend —tuminator

2009-03-20 16:37:51   I have had two experiences with the bargain barn. One was for an office chair, which I picked up at a highly reasonable price. The next, and most recent, was for a flat-screen computer monitor. I researched online, and corresponded via email. I was able to haggle them down from their posted price to what I felt was a reasonable price for a used 19 inch, flat screen monitor. So far, the monitor works great! If it lasts a full year without any dead pixels or anything, then I will count it as a terrific deal! (if it doesn't, I'll be sure to report that as well) —drpottsiv

Also has a great selection of "WTF?" stuff for your perusal. Too bad they close so early and don't advertise so much - it would be a great place to browse through if you're bored on campus. —HarrisonM

2011-03-06 13:39:59   There can be some interesting stuff here, but the hours are *very* weird. Computers are often listed for well above market price, and are often stripped of important components such as hard drives, RAM, and (for laptops) power supplies. I've seen some items sit on the shelf for months not because there was anything wrong with them, but because they were simply priced much higher than equivalent or better items on Craigslist or eBay. Prices seem to be set by the department that previously owned the equipment, but seem to reflect wishful thinking more than market realities.

Note to sellers: if you are selling an 6-8 year old computer and asking half the price of a new model of that computer that's 10 times as fast, you are probably going to wait a long time to sell it... —IDoNotExist

Waiting until the item goes to best offer is a good way to knock some sense into whomever is selling. I got a great deal on a 2 year old G5 a couple years ago making a best offer bid. If they don't take it the first time come back and submit it again. Eventually they get the hint or someone else answers the phone and accepts the offer. —ARWENNHOLD