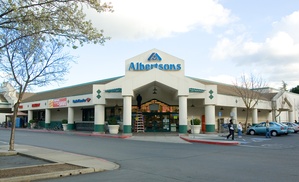 The local Albertsons has been turned into a Save Mart. The process took most of the month of June, 2007, with interior painting beginning on the 1st. Repainting the exterior, and bringing down the Albertsons letters and putting up Save Mart was done on the week of the 24th in June.

Albertsons was a national grocery chain. Albertsons broke up as a company in 2006 and its supermarkets were sold to different companies. Supervalu of Minnesota bought some of the stores and operated those stores under the Albertsons name for several years. Cerberus Capital Management bought the rest of the stores and created a company called Albertsons, LLC to run that smaller group of Albertsons stores. For several years, there was not one but two separate companies running supermarkets using the Albertsons name. The local store was owned by Albertsons, LLC and was pretty much identical to other Albertsons, LLC stores around the country, complete with occasional discounts, cheap store brand items, as well as meat and produce. In 2013, Cerberus Capital Management bought the rest of the Albertsons stores from Supervalu and now runs those stores.

The demise, break up, and sale of the original Albertsons company was a story of greed and mismanagement. Albertsons bought the parent company of Lucky in the late 90s. Lucky was a highly successful and popular grocery store with a huge and loyal following that went back decades. Its reputation as The Low Price Leader made it a great supermarket. Albertsons hoped to profit greatly from the purchase of Lucky, but in doing so Albertsons got rid of what made Lucky such a popular and trusted supermarket. They then got rid of the trusted Lucky name and its low price leader strategy. What made Lucky a great place to shop were its quirky commercials featuring the Lucky Lady and its reputation for low prices. Albertsons eliminated everything memorable about Lucky and got rid of Lucky's excellent management team. Loyal Lucky customers revolted and abandoned stores due to the arrogant dismissal of the Lucky brand. Albertsons executives saw their sales go down and their profits also fell. Albertsons took on massive debt. By 2006, Albertsons was failing financially. The decision to get rid of the Lucky brand spelled the doom of Albertsons. After many store closures, Albertsons could no longer stay in business. They were bought by a consortium of several companies and the Albertsons stores were divided among them. The Albertsons CEO and executives who were responsible for the downfall of the company were all out of the job upon the break up of Albertsons. If Albertsons had never bought Lucky, it is quite likely that Albertsons would never have gone out of business and the original Lucky would have continued to become a highly successful company that could have surpassed even Safeway in business.

In a bizarre turn of events, private equity firm Cerberus bought some Albertsons stores and over several years created a new Albertsons company that got back into the supermarket business. The new Albertsons started to buy up other supermarket chains and eventually announced on March 6, 2014 that it was taking over Safeway. This time, Albertsons is on a vengeful mission to take over the supermarket industry from coast to coast. They have aggressively taken over the follow supermarket chains: Jewel-Osco (biggest chain in the Chicago area), Acme(Mid-Atlantic), Shaw's and Star Markets(New England states), and United Markets of Texas. The locally owned Safeway chain will be absorbed by Albertsons, and power would move to the corporate office of Albertsons in Idaho.

In praise of Albertsons, they were possibly one of the few grocery store in Davis to carry Soy Vay's Cha-Cha Chinese Chicken Salad Dressing (along with Nugget) and Krispy Kreme doughnuts. However, this is no longer the case as Soy Vay is now carried at most supermarkets and even at Rite Aid.

Albertsons had a self-checkout area where you could scan your groceries and check yourself out. The process can be riddled with annoyances that require the interaction of the attendant, but with some practice it can be efficient. It operates by checking the weight of your items against a database of probable item weights. You can also buy alcohol using the self-checkout machines, but you'll need to show your ID to the attendant.

Albertsons fed hordes of hundreds of Davis High School students every single day, many of whom walk over from the school because they do not have cars to drive to better eating locations. One can expect to pay $10 for a lunch at the deli.

Albertsons also featured TV screens that blasted you with not-so-subtle advertisements and "living tips" as you're in line to check out. It was a case where advertising greed ended up annoying the very customers that the store depended on to stay alive. The TV screens were removed by Save Mart.

There was a Bank of America branch inside (with ATMs) and a Coinstar machine.

After 10 PM, you could only enter through the east-facing door.

In the Albertsons parking lot was a rePLANET recycling center. The vouchers you got in exchange for your recyclables were only redeemable for cash in Albertsons. 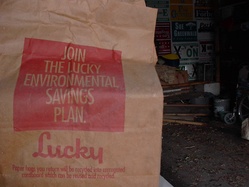 There was a statue outside, perhaps built as homage to the food gods. Some find this statue quite appealing in an odd and different way.

This location was originally a Lucky's until Albertsons purchased the company and eliminated the Lucky name in favor of Albertsons in 1999.

Supervalu, based in Minnesota, which owned some of the non-Save Mart Albertsons stores revived the Lucky name several years ago on a few stores in Southern California.

The Northern California Albertsons stores were purchased by Save Mart Supermarkets in 2007. Over a period of 9 months Northern California Albertsons stores were rebranded as Save Mart Supermarkets. Save Mart also operates stores under the name FoodMaxx and S-Mart. Shop smart. Shop S-Mart. In the San Francisco Bay Area, Save Mart restored the Lucky name in 2007 and now operates about 70 Lucky supermarkets http://www.luckysupermarkets.com. Most of those stores were originally Lucky stores and once again are Lucky stores as they were meant to be.

I happen to like this Albertson's. Sure, it seems there are some things over-priced. But, I find most students go to Safeway. I can avoid annoying social "hello's!" and "how are your classes going?!" contacts by going to this Albertson's. Plus, I love the self-checkouts. I'm not sure if it's because I feel anti-social sometimes or because I think I can check and bag just as good as the people paid to do it or if it's quicker or all of the above. Albertson's also happens to have a selection of candles that everyone in my family loves. —SS

2006-03-11 23:32:23   It's definitely pricey, but I live near this Albertson's and kinda like it. I found some fun party favors in a discount cart for my stepdad's birthday. The one thing about this Albertson's is, watch out during lunch hours on weekdays — the highschool is nearby, and it's swamped with kids! —AubreyJohnson

2006-05-04 13:02:20   ewwww...I stopped here on my way home since I was on that side of town- It smells really bad in there! it got worse as I went towards the meat and fish depts. I used to shop there regularly 2-3 years ago and since then its really seemed to go downhill. —MyaBrn

2006-06-08 14:09:17   The self-checkout machine is reason enough to shop here. (Perhaps the only reason, but still...) Is there any other place in Davis with these? One advantage about these is that you can get rid of a pile of change without being charged a fee. —SteveDavison

2007-01-19 00:41:59   I love the self-checkout. They should put up a timer and make it a game to see who can finish the fastest. Bonus for memorizing produce item numbers. Penalty for calling customer service. —AndrewChen

2007-02-28 18:38:04   The self-checkout is infuriating. Every third item or so the screen displays an error message and tells me to put the item back. Is there some sort of trick I'm missing? I look like Indiana Jones sometimes the way I slowly take the items off the pedestal. —BriannaBetancourt

2007-06-01 22:14:26   Just found out today from an employee that in a couple weeks they'll be changing over to a Save-Mart. The process of repainting the store started tonight. —RyanClifford

2007-06-27 00:45:54   Does anyone know if the deli sells Boars Head cold cuts? Safeway doesn't and the Nugget is just rediculously expensive compared to what I used to pay at home. If they don't have it here, do they sell it anywhere in Davis for under $10.99/lb.? —StephenPriest

2011-08-05 18:18:50   I remember in Jr. High School we used to come here (when it was Lucky's, affectionately known as "F***ies"), since they were the only 24 hour grocery store around (this is before Marketplace was built, if memory serves). Kids would regularly steal the Brach's bulk candy out of the bins, consume/keep some of it, then sell the rest to us "good kids" at school (especially popular were "gum dingers"). Also remember they had their own brand of generic Dr. Pepper, called "The Skipper". It tasted like someone leaked battery acid into cream soda, just terrible. Pre-energy drinks (of course), we often turned to "Jolt Cola" to keep us awake and up to nothing in particular. I also remember the size of the cockroaches you'd see outside the store at night... looked like something from some tropical rain forest, or a bad horror movie. Lucky's was also the place to play Lottery scratchers when they came out... after all, it was "Lucky's"! —OldDavis73

2011-08-13 13:47:50   I really hated and resented those in-store TV screens. They were intrusive and annoying. Good for Save Mart for removing them. —CovertProfessor