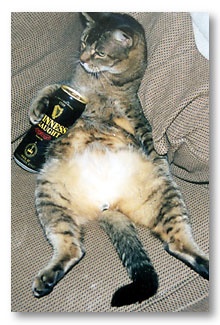 Alcohol, my permanent accessory Alcohol, a party-time necessity Alcohol, alternative to feeling like yourself Oh Alcohol, I still drink to your health "Alcohol" by The Barenaked Ladies

Alcohol is in beer, wine and liquor, and often just refers to those beverages in general. It can be found in bars and retail locations. In the very distant past, it was found in saloons until banned by law. Up until the early 1980s it was impossible to buy alcohol outside of bars in Davis. For more on this, see Town History. The California Penal Code Section 172 has some convoluted language about where various forms of alcohol can be sold in geographic relation to universities. In 2002 Davis passed an open container ordinance, banning consumption of alcohol from most public areas.

Read on for the scope of tasty and/or intoxicating libations in Davis:

What Happens When You Drink

Alcohol: the solution to and cause of all of life's problems. Love it like your mother and blame it for your problems like you do your father.

Here are some of the definitive drinks in the Davis boozing scene. Consult other websites for comprehensive recipe books.

Add your favorite beer, so that others might venture forth from the depths of Natty Ice.

What You Should Do If You Get In Trouble

If You Need Help With Alcohol Addiction

If the glass is full drink up, drink up this may be the last time I see this cup. If God wanted us sober he'd knock the glass over so while its full we drink up. -Jason Webley, "The Drinking Song"

Behold the rain which descends from heaven upon our vineyards, there it enters the roots of the vines, to be changed into wine, a constant proof that God loves us, and loves to see us happy. — Benjamin Franklin. Source: Isaacson, Walter. Benjamin Franklin: An American Life. New York: Simon and Schuster, 2003. p.374.

2005-08-02 16:58:16   What happens if the various police organizations catch you drinking? Is there a super nasty fine that will tap into my alcohol cash flow?!?! —JasonBickford

2005-11-15 23:40:29   Question: How true is it that low-cost alcohol can make you puke or get sicker than costly liquor and when you drink low cost alcohol in excess it terrible hangovers that aren't associated with high price alcohol? Is this 100% true? If so, why exactly? Tannins and such? Besides taste, what's really the difference between the $37 bottle of gin and the $6 bottle? —MichaelGiardina

2006-10-20 00:56:55   There's a CHEAP place at Travis Air Force Base next to the mini-mall. Most of the prices will be cheaper than stores outside the base, but there are rarely any more expensive because everything is tax-free. There's also a huge selection to choose from :) Of course, you'd need a military ID card to get in..... —RitchieLee