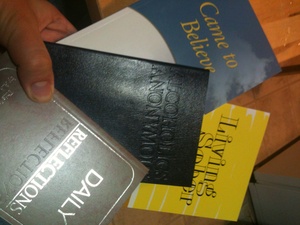 Here are some conference-approved A.A. reading materials. The book, "Alchohol Anonymous" (aka "The Big Book") in the center is considered the central text of A.A.

Alcoholics Anonymous is the original Twelve Step program for anyone who has a problem with alcohol. There are no dues or fees. The only requirement for membership is a desire to stop drinking. Davis has several different groups that hold meetings every day at various convenient locations around town. Several offer new members a free copy of "Alcoholics Anonymous," the main text of A.A. The local schedule can be found here. More general information and AA literature can be obtained at the A.A's national website

New members can attend meetings alone or with a supporter such as a family member or friend. Groups provide new members with a comprehensive meeting schedule for the Dixon, Woodland, Davis area as well as phone numbers of members willing to provide initial support or temporary sponsorship. New members are encouraged to visit various groups to see which best fit their schedule and ideals. Davis has some early morning weekday meetings, various weekend morning meetings and evening meetings every night. Some meetings are "open" meaning that those afflicted with other addictions as well as alcoholism are welcome to share in the fellowship as well as non-members. "Closed" meetings are for alcoholics only with discussion related solely to alcohol and alcohol-related issues. All members use only their first names to maintain the anonymity that's a core tradition to A.A.

One of the most effective aspects of A.A. is its focus on providing nearly continuous support for an alcoholic throughout the day. The nature of addiction is such that spontaneous cravings and temptations can lead to a relapse at any time. A.A. recognizes the potential for such pitfalls, and members are encouraged early on to secure a reliable sponsor from within the program, one who can offer guidance during times of crisis. Additionally, a vast multitude of meetings can be found in Davis and surrounding areas to fit nearly any schedule, and the Central California Fellowship of A.A. maintains a 24-hour hotline at (916) 454-1100.

Most people would consider A.A. a spiritual organization as its steps instruct individuals to turn their lives and willpower over to an individually-defined higher power. Most meeting groups have some element of spirituality among those who gather, although they are never supposed to be tied in with a particular sect or religious denomination.

However, some support groups have emerged which follow the Twelve Step outline without strictly adhering to A.A. principles. Some meeting groups are specifically tied to religions: there are Christian meetings and Pagan meetings. Secular groups acknowledge that the reality of biology and chemistry is greater than their will. The fourth step is intended to internalize that an addict cannot control all aspects of the world, combating the self-deception that they can stay in control while their addiction is active. Because of the varying interpretation, many meetings will note what kind of group they are so that people can find a meeting with the best fit for their personal beliefs.

Some meetings are also gender specific.