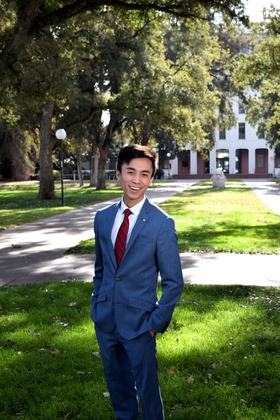 Experienced to LeadAlex Lee was an ASUCD Senator from December 2014 to December 2015. He served as President Pro Tempore of the ASUCD Senate beginning Spring 2015. He also founded Davis Filmmaking Society and served as its president from 2013 to 2015.

In December 2015, Alex declared his candidacy for ASUCD President. Running with Abhay Sandhu as his Vice Presidential candidate and the Summit Slate, he and his fellow candidates seek to build a new ASUCD that better serves students as Davis.

Alex double majored in Political Science and Communication. He is from from San Jose, California and has passion for serving the spectrum of communities and students at UC Davis. 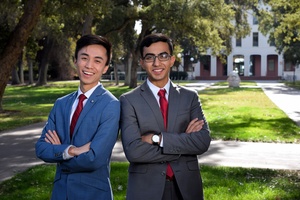 Since his announcement at Senate farewells in December 2015, Alex began his bid for ASUCD President. For the Winter 2016 ASUCD Election he will be running with Abhay Sandhu, his Vice Presidential candidate, and a slate of senate candidates from the Summit Slate.

I’m running to be your next ASUCD President! I am a third-year Political Science & Communications double major from San Jose, CA. For two years I was President of Davis Filmmaking Society (DFS) and was a board intern for the Taiwanese American Organization (TAO). I previously served as an ASUCD Senator from 2014-2015 and accomplished the following:

My name is Abhay Sandhu, and I am running to be your next ASUCD Vice President. I am a 3rd year Neurobiology, Physiology, and Behavior Major from Lathrop, CA. Currently, I serve as a board member for Shifa Community Clinic, a member of Sigma Mu Delta, and a research assistant at the UC Davis Genome Center. I began my time in ASUCD my freshman year as an intern for an ASUCD Senator and worked my way to become the Chairperson of the Internal Affairs Commission. My time in ASUCD has led me to author, edit, and vote on important forms of legislation that impact student life.


Together we’d love your support in leading the next ASUCD Executive Office. As President & Vice President, we will make sure your student fees are being used responsibly, your needs are met with student services, and your interests are represented to policymakers. We will commit our term to a new ASUCD focused on clubs, academics, jobs, and serving students.

Alex was a candidate for ASUCD Senate in the Fall 2014 ASUCD Election running as an independent. He ran as a second year Political Science major.

is campaign consisted of three pillars: clubs, boba, and scantrons. Coming from a club background, Alex Lee wants to advocate for student organizations, improve the resources available to them, and make their needs heard. As an intern project for ASUCD Senator Gareth Smythe he brought boba milk tea to the Coho with the help of the Coffee House director; this is evidence of his resolve to achieve goals and change you can taste. Alex would also like to bring more testing material vending machines to campus.

For a dependable, committed candidate who combines his ASUCD and wide club experience, students voted Alex Lee #1 for ASUCD Senate. 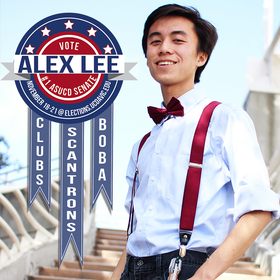 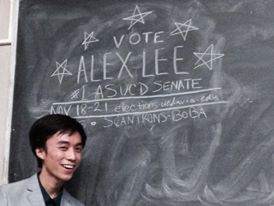 Since Alex Lee's first year he has been very active in the student organization community. Alex is the founder and president of Davis Filmmaking Society, the only film and moviemaking based club on campus. Naturally he is a strong proponent for the arts and will bring that to Senate. He has also accumulated a significant amount of ASCUD experience by interning for University Affairs (the past UC system advocacy unit) and two ASUCD Senators: Felicia Ong and Gareth Smythe. Combining his passion for clubs and his ASUCD background, Alex will advocate for and represent the builders of communities at the Senate: student organizations.

Candidate statement for the Fall 2014 election is below:

As president and intern for other club boards, I understand the obstacles and needs that student organizations face. If elected, I want to expand the resources available to student organizations and the means to access them more easily. In particular I want to increase the amount of money Club Finance Council (CFC) can grant organizations. Annually the ASUCD Senate reviews and approves the entire association’s budget. I will prioritize increasing the funding for CFC. Additionally I will work with our diverse community of clubs to resolve specific issues they face now and in the future. With the help of ASUCD Outreach Assembly and the Student Organization Special Committee, I will represent the 700+ organizations on campus.

BOBA IN THE COHO

As an intern for Gareth Smythe, I took on the task of bringing boba milk tea to the Coffee House. After two quarters of work, my team, the Coho Director, the Coho staff, and I have brought the tasty drink to Swirlz. We are still currently adapting and improving the product. This platform serves not only to highlight my ability to accomplish goals but also promote the availability of the drink. My resolve to implement change is proven and tested. This is change you can taste.

Currently you can get blue books or scantrons from only select areas of campus.

The MU bookstore will also be closed and relocated in the coming year; in light of these future renovations, I want to work with the UCD Bookstore to install more testing materials vending machines in the Silo. Olson Hall is simply too far from major test-taking hubs like Giedt, Rock Hall, and Sciences Lecture Hall. Additional locations would ensure that the nightmare of finding out last minute you lack a scantron will not doom your grades. Just pop on over to a vending machine near you!

If you would like an independently minded, capable representative for the arts, student services, and student organizations, vote Alex Lee #1 for ASUCD Senate!

Alex placed first in the seven-candidate election of Fall 2014 with 787 first-place votes.

He currently holds the record for second most votes in an ASUCD Senate election. 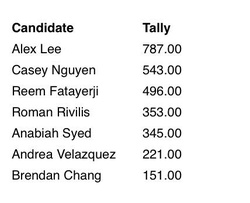 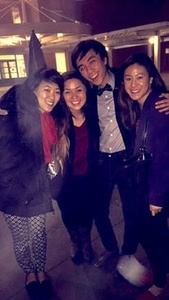 Early in his term he pushed for the creation of a special committee to engage clubs with student government - the Student Organization Special Committee (SOSC). SOSC was blocked from receiving funding from the ASUCD Business & Finance Commission; the lack of budget ultimately led to SOSC's dissolution in Winter quarter to Alex's dismay.

However his term was marked with several successes. He successfully got Boba Milk Tea implemented in the CoHo in Fall 2014 and made some improvements in the Spring with a staffer who had expertise in teahouses. In August 2015, Alex completed another platform: getting a testing material vending machine in the first floor of the Student Community Center. The new machine would service the Silo region of campus so students can buy testing materials in the late and early hours before an exam. He successfully also fought for an $8000+ increase to Entertainment Council during the last hours of Budget Hearings so they could maintain their already declining capabilities to host concerts.

In Fall 2015, four ID card designs were presented to the undergraduate and graduate student bodies to be voted on as the next design. ASUCD featured the designs on the Fall 2014 ballot where the cards drew in over 3000 votes. Ultimately design #1 was chosen by ASUCD. Talks are still underway between campus officials, the registrar's office, ASUCD, and GSA to determine the implementation of the new cards. New AggieCards are expected take effect with the incoming class of 2020 in Summer 2016.

Alex also passed CFC Reform to allow for higher maximum annual grants per club, promotion of affordable ASUCD services, and food costs to be allocated in CFC grants. Despite widespread support and passage, the Club Finance Council in January decided to only use the reforms once and subsequently did not follow through with the reforms. 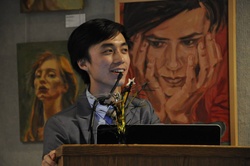