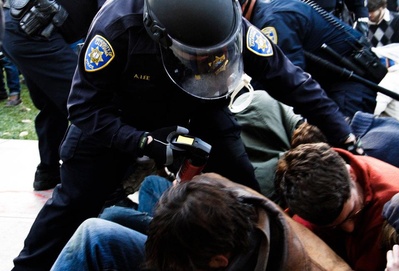 Alexander P. Lee, also known as "Officer O." in the redacted Reynoso report, was an officer with the UC Davis Police Department. He gained notoriety for pepper spraying peaceful, sitting protesters during the UC Davis protest on Friday November 18, 2011 at the direction of John Pike. He had been known for some time as "the second officer."

Lee, along with John Pike, is no longer a UC Davis police officer. Lee's employment with the University ended on July 11, 2012. The SacBee has revealed that Pike was fired; it is unknown how Lee's employment ended. The Yolo County DA's office has yet to determine whether or not to file criminal charges against the officers.

Lee is an Aggie who graduated with an undergraduate degree in 2008. While Lee was a student, he worked for the police department for over two years as an Aggie Host. He was recognized with an award his senior year. He returned to campus in 2010 as a security guard and was later hired on as a full police officer. It's likely that Lee was the least experienced officer present at the events of November 18.

The Vanguard has implied that delay in releasing the Kroll/Reynoso report was partly due to shielding the name of this officer, even though it had been widely known and is now (with the publication of the Vanguard's article) even more widely known. It has also stated that the University of California is now arguing for the release of Alexander Lee's name, since it is now part of the public record, citing the Vanguard release of the name as evidence.

His photo (the photo at right) first appeared on the Davis Wiki on 29 November 2011. The photo clearly shows the name "A. Lee." Early research by a wiki gnome deduced that his name was probably Alexander P. Lee. Additional evidence for this hypothesis has now been provided by the Vanguard, which used the Davis Wiki's information as a starting point; this article explains the process that uncovered the evidence. Once the Vanguard released Alexander Lee's name, The Davis Enterprise revealed that it had had its own picture showing the name of A. Lee all along, that videos showed Lee pepper-spraying protesters at close range, that the protesters had been chanting "A. Lee, A. Lee," and that it had tried to obtain Lee's full name but failed. However, the Enterprise article refused to provide Lee's first name, or even to name the blog or blogger that had forced its hand.