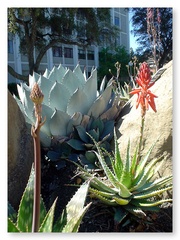 Aloe plants (Aloe L.) are a popular genus of succulent with over 300 species occurring naturally in Africa, Madagascar, and Arabia. Aloes belong in the lily family (Liliaceae) and readily cross-pollinate between species. Generally, aloes range from grass-like succulents to large trees and prefer relatively dry, warm climates with cool, moist winters such as we enjoy in Davis — many aloes prefer light shade and some are frost intolerant (including the popular Aloe vera). The leaves of the aloe plant contain a mucilaginous sap which has been well documented for its wound-healing, anti-inflammatory and immune-stimulatory qualities. Aloe vera is one of the first succulents ever documented and has been recorded well before 1500 BC. 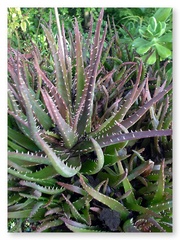 Characteristically, aloe plants produce a rosette of leaves that can vary in size and color with the species. Most types remain ground-hugging and propagate by producing offsets to develop a sizable colony. Aloes can bloom in both spring and summer from long stems that grow from spaces between the leaves. Smaller aloes tend to produce single spikes or those that fork into two flower heads. Virtually all aloe blossoms are attractive to hummingbirds, but aloes have evolved to be specifically pollinated by long-beaked African nectar feeders. Aloe can be toxic to dogs, with symptoms such as vomiting, depression, diarrhea, anorexia, tremors or a change in urine color. 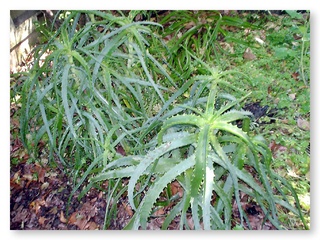 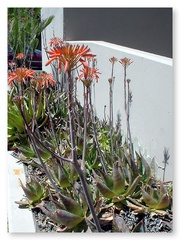