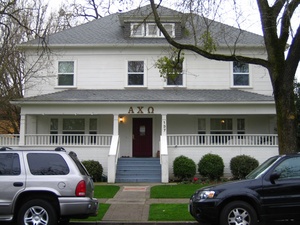 The front of the house,

Alpha Chi Omega, or ΑΧΩ, is a sorority at UC Davis located at 137 C Street . Although they are a sorority in the sense that they admit only women, they traditionally refer to themselves as a fraternity because their organization predates the term. One of the few Greek houses located downtown, it finds its home on the corner of C Street and 2nd Street behind the Fast and Easy Mart. The structure is a white Colonial Revival home, a City Merit Resource originally built for pioneer Matthew Clancy.

Alpha Chi Omega's Founders chose "Alpha," the first letter of the Greek alphabet, because they were forming the first fraternity in the school of music. Since they thought they might also be founding the last such fraternity, "Omega" seemed appropriate. "Kai," meaning "and," was added to form the beginning and the end. "Kai" was soon changed to "Chi," a letter of the Greek alphabet.

"Together let us seek the heights"

The Alpha Chi Omega Foundation is the philanthropic arm of the sorority, providing support to individual members, to chapters and to the sorority in the form of educational grants. The Foundation financially supports Leadership Academy, Program formerly known as IMPACT, and Kristin's Story, as well as other educational programming.

Alpha Chi Omega encourages its members to support victims of domestic violence through connections with local agencies and to assist in the development and implementation of educational programs and hands-on activities to eliminate domestic violence.

The MacDowell Colony, located in Peterborough , New Hampshire , was Alpha Chi Omega's first altruistic project and upholds our tradition of interest in the fine arts.