Alyson Noele Sagala is currently a ASUCD Senator who won her seat in the Fall 2012 Election on the SMART Slate.

Alyson Sagala is a 4th year Political Science and Communications double major from the Bay Area. She has been active in several cultural and retention organizations on campus as well as the ASUCD unit AggieTV, having served on the unit's first Executive Board in 2010. She returned from a year abroad in June 2012. 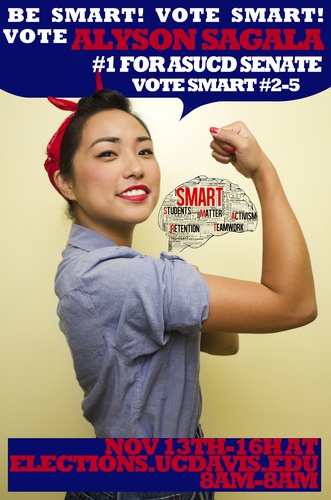 HELLO FRIENDS! My name is Alyson Sagala, and I am a 4th year, Political Science and Communication double major from San Jose, California running for ASUCD Senate with the SMART slate. My drive in wanting to serve UC Davis with everything I have comes from my wonderful experiences here on campus, as well as the values about education and culture I learned abroad. I spent my first two years at Davis involved with multiple organizations on campus including Mga Kapatid, BRIDGE [email protected] Outreach and Retention, Filipinos in Liberal Arts and Humanities, and AggieTV — ASUCD’s television station and media unit. My time working with UC Davis’s cultural communities, as well as promoting and covering major events throughout the year like Dance Dance Revolution, Picnic Day, KDVS fundraiser, and Entertainment Council concerts, helped me cultivate a deep appreciation for ALL facets of Davis life.

Recently, I had the opportunity to spend a year abroad in Paris, France where I was able to represent our university at a global level. Diplomatically representing UC Davis during an intense period of international attention in November of 2011 helped me truly understand what it meant to be a student at UC Davis.

Overall, these past three years have instilled within me a fierce pride and passion for being an Aggie. That’s why if you choose to vote for me, I vow to better our community in the following ways:

BIGGER AND BETTER MUSICAL ACTS AT UC DAVIS In the past year Entertainment Council has booked some of the biggest acts in the music industry, such as as Drake, 30 Seconds to Mars, The Shins, and Snoop Dogg. Although these shows took place on our campus, the majority of the profit was kept by show promoters rather than going back to students. Increasing the financial capacity of EC would allow our school to receive full profits for these events. Instead of promoters, revenue would go back to funding student clubs/organizations through increasing the budget of the Club Finance Council and institutionalizing funding for events that have been threatened to disappear in the past, such as cultural grads and Cultural Days. Ultimately, I will work to increase Entertainment Council’s large show reserve fund, as well as streamline access to utilize it, allowing ASUCD and those in charge of the unit more efficient control over booking bigger and better acts on campus.

MORE BIKE PARKING ON CAMPUS I’m sure I’m not the only person who has had their bike stolen (more than once)! The lack of parking in high traffic areas of campus has forced students to resort to parking their bikes without locking them to any rails, making it easier for thieves to up and walk away with perfectly good bikes. I vow to work with administration to increase bike rack parking (especially at the dorms!) to prevent the level of bike theft on campus.

If you want student advocacy with a social conscience, vote for me Alyson Sagala #1 for ASUCD Senate and SMART #2-5.

2012-11-01 20:02:20   Passed her petition through the class for easy signatures instead of taking the time to interact with students and listen to their opinions. Not to mention that doing this during a lecture is disrespectful to both the professor and the students. I personally do not believe that someone that does not obtain approval through their own work can accurately represent the student body. —RenTan