Amazu is an F3 savannah. He is a third generation hybrid, a result of breeding a domestic cat with an african serval. Both his mom and dad were savannahs, so he is somewhere between 14-15% serval. His coloring is silver-spotted tabby.

Living with a hybrid kitten has certainly been an interesting experience so far. He is very, very smart, so he gets into everything. Nothing remotely resembling food can be left out, and I have had to install child locks on the cupboards (even this doesn't always stop him). If something is, by chance, left out, it will invariably be found chewed up, played with, and scattered all over the floor. He has a weird thing for knotted plastic bags, so every time I open the cupboard under the sink, he tries to steal one.

He has a very puppy-like personality. He follows me around the apartment, comes when I call him, will play fetch on occasion, and if he has something in his mouth he knows he's not supposed to have, he runs! He is leash-trained, and I am in the process of teaching him to walk with me. Despite his mischievous nature, he's a bundle of fun. He's extremely energetic and makes me laugh with his antics. I can't stay mad at him too long after he's bad because he crawls into my lap, snuggles up against me, and starts to purr. He is an intensely affectionate animal.

Zorro is best known for his repertoire of tricks. He LOVES food, and will do anything for cat treats, so I've taken advantage of the situation. He now knows the commands "up", "sit", "lie down", and "roll over". I adopted him way back in 2002 from the SPCA at Petco.

Zorro has had his world turned upside down by the arrival of Amazu - very crazy kitten. Formerly known as the most energetic cat in the household, he simply couldn't keep up with Amazu's antics. After a few weeks, he has adjusted quite well. Now Zorro and Amazu can be seen chasing each other down the halls or cuddling up and having an all-out grooming session.

I must admit he's been very patient. Amazu likes to pounce on him from around corners, sneak up behind him and bite his leg, or start playing with his tail when he's sleeping. 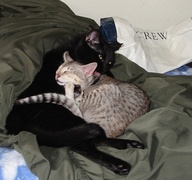