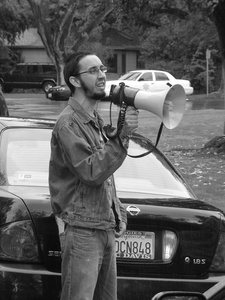 Andrew Peake is a UC Davis Alumnus. He was a member of the ASUCD Senate, having won while running on the L.E.A.D. Slate in the Fall 2006 ASUCD Election. Andrew was president of the Davis Campus ACLU, a 2006 Summer Advisor, a board member of the Yolo County ACLU and was an Aggie Host.

Peake is running for ASUCD President in Winter 2008. Apparently this has something to do with hammocks.

You can reach Andrew at [email protected].

"Andrew Peake is a fine human being." —Brent Laabs, defending Peake at a Senate meeting in 2006, just before he became Senator.

Senator Peake took strong stances on many issues in budget hearings, including funding the campus student art gallery, ASUCD Pathfinder, and ASUCD staff appreciation and development. He voiced opposition to large increases to Aggie Pack funding (stating that "It should be funded by athletics") but did not oppose Molly Fluet's increase of funding to Aggie Pack outreach. This is a related program that sends Aggie Pack to local schools and brings underprivileged children to UCD games.

He went to Berkeley to talk about representation for the Regents, which was covered in the blog Beetle Beat.ca

On March 15, 2007, Andrew was shown on Sacramento's Fox 40 morning news, being quoted about textbook prices and the unfairness of addons bundled with textbooks (such as CDs).

On April 12, 2007 Senator Peake commented on a Jewish Hillel House retreat spending bill stating "This seems to be reinforcing Jewish values and identity development. I see that as worthwhile, but not something ASUCD should be funding. The text seems religious and inclusive."

As reported by the California Aggie on April 16, 2007 Senator Peake stated that "They were definitely talking about the contracted workers in there," said Andrew Peake, an ASUCD senator and speaker at Saturday's demonstration. "There were prominent UCD faculty and city councilmembers there at Vanderhoef's [house] and we got their attention We strongly suggest that the administration starts treating the people who make UCD possible with dignity and respect."

Senator Peake was shown on a right wing propaganda video He is shown stating that PaulHarms could call the campus police to clarify rules on consent to being videotaped. The clip is heavily edited and Steve Ostrowski has decided to misconstrue Peake's statement. The Leadership Institute has used the video for their conservative activist campaigns. It should be noted that the above video is heavily biased as that was the intentions of the one who edited the video. For the record Andrew Peake loved the fact that he got his own heavy metal theme music in the video; it made him laugh.

On May 3, 2007 Senator Peake stated "I believe that we've had a bipartisan government since I've been in office. I don't think there's going to be any difference, and I mean that in a good way."

On May 7, 2007 it was reported by the California Aggie that Senator Peake stated "There [were] a lot of community [members] at the meeting saying that they couldn't work with somebody in our government," Peake said. "We don't want to be rash and we're not trying to get Markevich fired, necessarily, but I definitely feel we should look into this a little more." As reported by the California Aggie Andrew Peake said he felt a closed-session meeting is necessary to discuss whether any action should be taken against Markevich. Peake said although he advocates for free speech, he believes Markevich should be held responsible for actions that were "blatantly racist."

On May 1, 2007 Senator Peake was an active participant in the protest march. He stated as recorded by the California Aggie that negotiations between the university and the Sodexho workers had stalled: "I wouldn't have called it a negotiation," said Peake after the meeting. "None of the people we met with had power over the issue. The subject of another meeting was put on the table, but there wasn't any active action for it on the part of the administration. Janet Gong came out and promised to relay some of the concerns to the chancellor. She then answered some of the questions from the crowd."

However, Senator Peake stated that "We're pleased with the amount of students." "I think there were about 450 at its peak. But the administration needs to know that these actions are not going to stop until a decision, the right decision, has been made."

On January 4th, 2007 Andrew Peake and Molly Fluet discussed their early planning for condom machines to be placed in the dorms. On January 19th, 2007 the Aggie printed an editorial declaring that the plan lacked forethought and feasibility. Andrew found this funny because the plan was in the early planning stages. The plan was more then feasible, and has been attempted by Student Housing before, though was abandoned due to vandalism. Molly and Andrew have since been working on other ways to increase access to contraceptives in Student Housing.

Andrew is also working on a number of other projects. He is currently working on LGBTIQ outreach at summer advising, He also is working on creating a program to help Freshmen students talk to their roommates about sex and sexuality.

Andrew made a run for ASUCD President in 2008. At the center his campaign was a promise to construct hammocks across campus. He also has spoken extensivly on issues of waste and the need for a smaller, more focused student government. Andrew Peake and Laura Nevins did not accept fliers from the Elections Committee so they did not spend any student fees on their campaign. 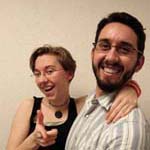 Do you enjoy relaxation?

Do you enjoy hammocks?

Did you know you can relax in a hammock?

We just found this out.

So our plan is to install hammocks across the UC Davis campus.

From the California Aggie Editorial Board Endorsments

"Though he did not earn The Aggie's endorsement, Andrew Peake, also running for president, brought refreshing honesty to the table. Peake was very open about voicing negative opinions of ASUCD in the hopes that his speaking out would address senator accountability. His idea of tying senator's pay to job performance should definitely be implemented if a viable method of oversight could be found. Peake's suggestion of creating a trust for Cal Aggie Camp, a camp for underprivileged youth would protect the program's funding from future budget cuts while also making it self-sufficient."

My name is Andrew Peake and I am running for ASUCD Senate with L.E.A.D. I am a second year Political Science major. I have worked with Summer Advising, The No on Prop. 85 Campaign and I am the president of the Davis Campus American Civil Liberties Union. I want to be an activist in the Senate for social justice, social change and a social scene. There are a wide range of issues that I would like to work on, they include: creating an Arts and Entertainment Commission to help student artists make their mark on our campus. I would like to continue working to create one of the most open and safe LGBT campuses by creating available gender neutral bathrooms and expanding LGBT outreach and education into the dorms. I would like to help our community come together by creating the ASUCD Outreach Assembly. This organization would help like minded groups join and work together. These things are practical and obtainable, ASUCD has the resources, they just need to be put to work. Finally I would like to make a commitment to be available to every student or group who wants to have access to the senate. I will not hold my office hours hidden on the third floor but make myself available to the students. If you want a senator who is open to all ideas, willing to work hard, and listen VOTE #1 FOR ANDREW PEAKE!

He also supported the rest of the views of the LEAD Platform.

On the 13th of November, the California Aggie ran an article about a confrontation that occurred between Peake and the ASUCD Controller Kai Savaree-Ruess. They have since apologized for their actions and have been critical of the Aggie's article for exaggerrating the incident. The ASUCD Court determined that Andrew Peake was not a party in the closed session of Kai Savaree-Ruess in Court Case #34 and therefore the minutes were released.

"Perhaps the most progressive candidate, sophomore Andrew Peake will ensure that lesbian, gay, bisexual and transgender students' needs are met. His goals as a senator include converting single-sex campus restrooms to "gender-neutral" restrooms. As an American Civil Liberties Union leader, Peake appreciates civil rights and has significant understanding of business and government. His humble attitude makes him approachable and students will quickly take to his laid-back personality."

Andrew, just for note, this is your public page. That is, it's about a public official (you), so it is maintained by the community. The page that you control (more or less) is AndrewPeake, which hasn't been created yet. —BrentLaabs

2007-02-17 18:17:52   The "Some More Specifics" section. Is it necessary? It seems part of his prior platform and written in a tense that is more appropriate for his personal page... Opinions? —CarlosOverstreet