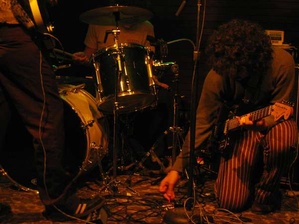 Antlers was born in Davis, Calif. in 2005 with only a few birth defects. Easily repaired by non-invasive surgery, Antlers was one of the sweatiest bands in town, playing alongside other local acts like Art Lessing and the Flower Vato. After numerous shows in the area, bad weather, delayed practice spaces, and fumigated garages forced them to relocate to Oakland, Calif. They completed a composition of songs that takes approximately 3,667 seconds to inhale. Don't worry though, Antlers has done a lot of inhaling as well. As of May 2015, it looks as though the band is no longer in existence.