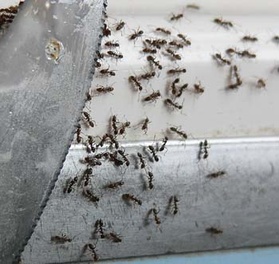 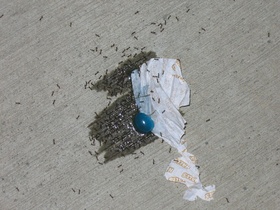 While it may or may not be true that Davis is built on one gigantic ant hill, it's fair to say that if you live in Davis long enough, sooner or later you will have a major ant invasion.

The ants you will almost certainly find in Davis are California's favorite invasive Hymenopteran, Linepithema humile. The common name for this ant is the Argentine Ant, owing to its country of origin. Because only one colony was imported, (hopefully by accident) the ants lack the genetic diversity to differentiate between colonies and will form huge polydomous nests, meaning they have multiple queens. Methods used to control Carpenter Ants and other native Californian ants will not be as effective, so special care must be taken when dealing with Argentine Ants.

In terms of food, ants seek out proteins and sugars. They're not really interested in lettuce and other foods lacking these two groups. Jello (though not the sugar-free variety) seems to provide ants with both of what they crave! Filling up on their bounty, the accordion-like 'plating' surrounding the ant's abdomen expands as the creature fills its two stomachs; one stomach is for personal use, while the other, known as the "crop," provides food for others in the colony. Once they've found a food source, ants will secrete a chemical trail from their abdomen to provide a path back to the source for the rest of the nest. Back at the nest, ants will share tasters from their crop, and the rush is on! The rest of the colony caravans out to the food source to fill up and provide food for other friends back at the nest.

Sometimes ants will also forage for water, lapping up spilled contact solution, or drinking straight from the tap.

Ant hill out near the wild part of Putah Creek. Photo by E.K.

Argentine Ants in Davis, Redding, and Los Angeles would consider each other sisters and join forces against us. They have ousted most native ants and have found a niche picking up after the crumbs we leave behind, like unpaid janitors. They will descend upon and ravage the dinner we left on the floor while we went to the bathroom, or crawl through the threads of a poorly sealed jar of honey and spoil it. They are so small and numerous that they can attack and kill entire honeybee hives!

Visit our Town Wildlife page to learn more about other infestations you may experience! 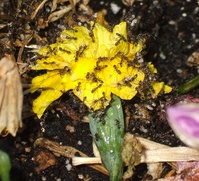 Ants might find your poorly tended flower pot to be a nice place for a home.

2007-01-14 20:14:21   When I was young my and a friend of mine would harvest red ants from near the 3t's and take them over to the little league field where lots of Argentine ants made there homes. —StevenDaubert

2018-07-25 10:00:38   My home had Argentine Ants when I moved in. In my case, it was because of an unkempt yard. They are very attracted to mulch and rotting wood, so proper yard maintenance is just as important as keeping a clean home. —ToddGlenn