California area code map All Davis phone numbers are in the 530 area code. Davis used to be in the 916 (Sacramento) area code, until November 1, 1997. Phones here use 7-digit dialing; you can call a Davis number without its area code.

California has 25 Area Codes. Students are likely to see many of these area codes, because many do not change their cell phone numbers when they move to Davis. Until the mid-1990's, all area codes had '1' or '0' as their middle digit, but this was discarded when extra numbers were needed. As late as the mid-1960's, phone numbers were 5 digits preceded by two letters, as in the famous phone number "PE6-5000" for the PEnnsylvania Hotel in midtown Manhattan. In Davis the early numbers all were part of the SKyline exchange. These are the phone numbers that begin with 75. An example number would have been SKyline6-5611.

Davis also has a common list of Telephone Number Prefixes. 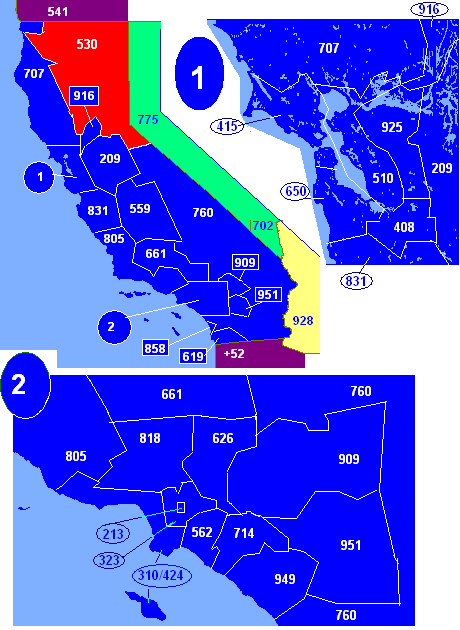 Out of state area codes

A list of all area codes in use in North America

Davis is not the southernmost city to bear the 530 Area Code. as Winters has some (530) and it's slightly south of Davis, making it the winner. The 530 area code also goes further south on the eastern state border.

The above map is cut from a pdf file from some important place in Des Moines. It shouldn't be up here, and someone with "skillz" should make a better one.