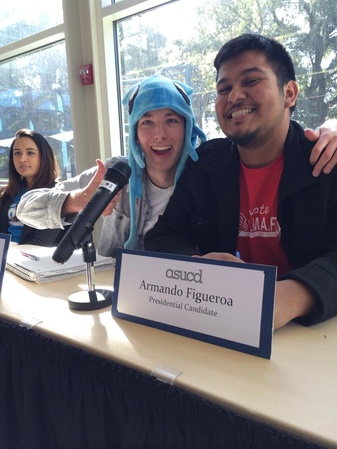 Armando (right) and Max (left) at the CoHo Debate

Armando Figueroa was a candidate for ASUCD Senate in the Fall 2012 ASUCD Election running on the SMART slate, winning with 669 votes. As a senator he proved to be both a fierce defender of the communities he came from while working with the exec to compromise on the budget and other issues. He is now a candidate for ASUCD President with Maxwell Kappes as his Vice-Presidential candidate. They are running on a SMART/Independent fusion ticket. 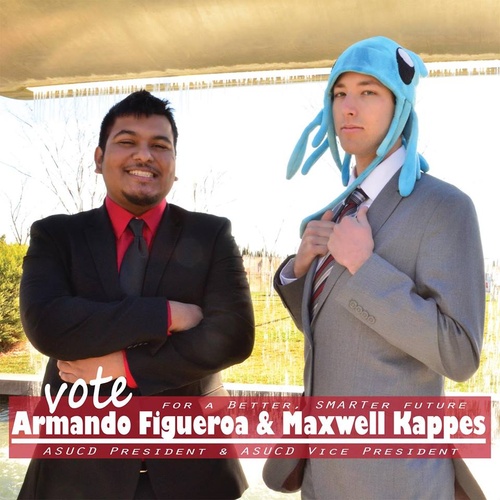 I’m Armando Figueroa and I previously served as ASUCD senator, but more importantly, a student leader serving all underrepresented progressive student communities, working with various departments such EOP, Student Housing and the SRRC, as well as many student organizations on campus.

I’m Maxwell Kappes, and I previously served as your ASUCD Senator as well, representing the more than six hundred clubs on campus with my experiences from leading Davis Urban Gaming Group, Humans vs. Zombies, and serving as an officer on several other groups.

Together we are running for President and Vice President of ASUCD. We are a coalition of SMART and Independent, looking to serve all students.

Make the Transition Out of the Dorms Easier

When student housing finally welcomes first years and transfers into the community, it can be difficult for students to manage new parts of their lives alongside increasingly challenging schoolwork. We intend to expand Counseling and Psychology Services (CAPS) to include conflict resolution services, specifically to assist with roommate issues and dealing with the challenges of a group living dynamic that apartment dwelling frequently presents. Additionally, we want to expand the Student Farm’s relationship with the Pantry, so students new on their own know what foods to eat and how to cook them.

As senators, both of us were involved in expanding student involvement in campus renovations and construction. Using that experience, we will serve as fierce advocates for an expansion of round-the-clock studying spaces and computer labs. By the end of our term, when someone mentions “the 24-hour room,” you’ll have to ask them to clarify which one.

Bring More Student Services to Everyone

ASUCD is remarkable in that it provides more distinct services than any other UC student government. However, many of these services, such as The Pantry, a food bank for undergraduates, and Aggie Legal Services, which offers free consultation from a lawyer, and underutilized and obscured from the bureaucracy that threatens to reign over them. We want to give all of our units a better opportunity to actually serve students, as well as increase the services provided to all Aggies, including affordable senior portraits and professional audio recording.

Student organizations frame most Aggies’ UC Davis experience, but frequently, it can be difficult to find your niche. The Activities Fair, currently the easiest way to interact with the most amount of clubs, is nearly halfway into fall quarter, long after most rush events and welcome weeks. By working with student housing and the Center for Student Involvement to move this key event to week zero, first year Aggies can get a better understanding of all of the opportunities provided by their peers. We intend to involve ASUCD’s resources in club life beyond the first week of school as well, providing more collaborative opportunities for student organizations.

Campus life should not end before the buses stop running. After a midterm, or during a study break, being able to relax and interact with your fellow Aggies are among the best ways to maintain a high level of mental health. Our proposed activities range from weekly trivia nights at the on-campus pub to rentable sporting goods at the quad, with frequent open mic nights and karaoke events. We want to see UC Davis as a center of student engagement, not just the place you go to take classes.

Promote Student Advocacy to Administration, not the other way around

Over the last decade, communications between high level administration and the student body has decreased to the point that only the executive office has frequent contact with those in positions that can enact real change. As your executives, we want to open these communications up to all students, as well as serving as the loudest voice in the room. With us, administration won’t be able to try to raise tuition or cut more sports because there will too many students at the table. 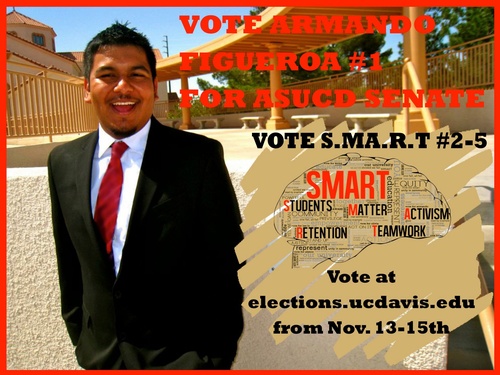 My name is Armando Figueroa and I am running for ASUCD Senate this quarter with the Students Matter Activism Retention Teamwork Slate. S.M.A.R.T is a group of socially and politically enlightened students who care about the communities that support them, and work to make decisions for the university that benefit everyone as a whole. I have decided to run because I want to give proper representation to all student groups, and I genuinely care about improving student life on this campus.

As an ASUCD senator, I will address the following and more:

Emiliano Zapata once said “the land belongs to those who work it.” I firmly believe that without organization, student workers are in vulnerable positions. So to better support student workers, I will organize outlets for us to dialogue about pressing issues. Furthermore, I will initiate communication with various campus departments to find ways in which we can holistically support all student workers on this campus. I will create an effective medium for student workers to network as well. In order to truly be a model institution, we must look after those who put in the extra hours without pay, who innovate on a daily basis to make our campus attractive and inclusive. Most importantly, we must look after those who enable our university to meet it’s full potential.

CLOSE THE DISCONNECT BETWEEN ADMINISTRATION AND STUDENTS

I will not only work to improve the communication with administration and students, but ensure that it is effective by prioritizing student concerns. I will create more dialogues and programs through various effective avenues, such as working with the student undergraduate advisory board. This will allow for greater student interaction with administration. After the incidents of Nov. 18, I want to ensure students that administration accountability can and will happen, as long as we all engage in the simple collaboration that is needed and wanted from both parties.

VOTE TO PRODUCE THE RESULTS WE WILL BRING ABOUT TOGETHER. VOTE ARMANDO FIGUEROA FOR YOUR #1. VOTE S.M.A.R.T FOR YOUR #2-#5