The UFO in Arroyo Park crash-landed on December 6, 2004, with the assistance of Richard Lowenberg. A re-creation of its trajectory can be found on Google's 3D Warehouse. The saucer shaped ship embedded itself into the park during the impact, but quite a bit of it is still visible above the ground. Alien writing can still be seen along the exposed edge. The UFO also used to have an antenna, but it seems to have been the object of petty theft.

Upon its initial impact officials surrounded the object with chain-link fences. However, the fences have been removed and the alien spacecraft is now a popular place for people to stargaze, or simply to watch the frequent soccer games that occur in the park. 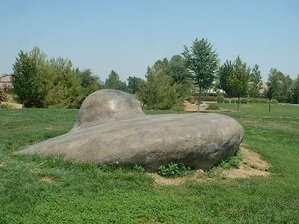 The extra-terrestrial spacecraft remains where it crashed in December of 2004. 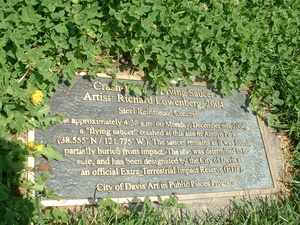 A plaque designates the site as an Extra-Terrestrial Impact Reserve (ETIR). 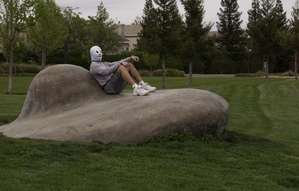 The crash site is a part of Davis' Art in Public Places program.