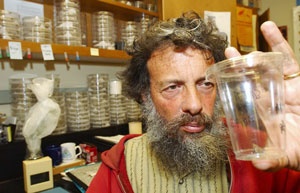 Weather report from Jan 13, 2006. Dr. Arthur Shapiro is a Professor of Evolution and Ecology at UC Davis. His wild black and Grey beard and mane of hair, unwashed-looking jeans, constantly faded and worn shirts, and leathery brown skin all make him look like a homeless guy — some even refer to him as the "homeless professor."

Arthur Shapiro hangs out in the MU and can be seen walking all over campus, sometimes catching butterflies and moths. He is one of the world's foremost experts on butterflies, and sponsors the yearly Butterflies for Beer competition. He has the website butterfly.ucdavis.edu.

Dr. Shapiro has been married since 1969 and has two children. He does not drive, and neither does anyone in his family. His wife is also brilliant and can be found at notable lectures whenever they happen around town. Their children, now grown and moved away from Davis, are also highly intelligent and knowledgeable. As for how he appears, he responds that "I dress the way I do because I believe in the supremacy of content over display. I'm also more comfortable." He considers appearance superficial and arbitrary; anyone can buy a suit at a department store -and it doesn't change anything. Study hard and contribute to mankind's knowledge, now that's accomplishment worthy of respect.

Dr. Shapiro is also an amateur weather forecaster. His forecasts are hand written and posted on the door of the EVE department at 2320 Storer Hall. They are remarkable in detail and showcase a certain amount of weather wit. They may indeed be the best weather forecast for the Davis area.

Art in the News

Dr. Shapiro is definitely a genius. I heard/watched him speak about ecological/evolutionary succession once; it was wonderful! - CynthiaHe

Dr. Shapiro was the most animated speaker of the convocation, with an inspired essay on some bleeping thing. —TomHinds

2012-04-13 13:43:34   If you like thinking about how small things in science tie into the greater everything, take one of his classes. If you like learning more than just what's written in the course guide, take a class. If you like good storytellers, take a class. He's absolutely brilliant and is easily one of my favourite professors. —JaniceW