Artistic Differences is a semi-professional theater company dedicated to bringing rarely produced musicals and plays to the stage. Founder Erik Daniells started the company with the goal of producing lesser-known shows and casting them with top notch performers from the Davis-Sacramento region, creating quality theater that everyone would want to see.

Would you like to be involved in our next production? Visit http://artisticdifferences.net for more information. 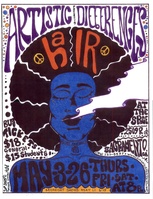 Their first production, "Falsettos," received rave reviews. Davis Enterprise Reviewer Bev Sykes said in her review, "If the first production, 'Falsettos,' now playing at the Hoblit Performing Arts Center, is any indication, 'Artistic Differences' should have a long and successful life. Charles Peer, reviewer for Outword Magazine declared, "..the performances are as moving and as touching as I have ever seen."

Their second show, "HAiR", opened May 5th, 2007 at The Space in Sacramento, CA and was a smash hit. Bev Sykes dubbed it "an excellent, energetic production" and David Jacobson of Village Life wrote "this production may be better than the original." Thanks to generous support by local media, Artistic Differences' production of HAiR sold out it's entire run after the first weekend.

They also held a benefit show on Sunday, June 1st 2008 at 7:00 PM at the Benvenuti Performing Arts Center, featuring songs from past and upcoming seasons.

Artistic Differences Theatre Company's upcoming productions include 1940's Radio Hour this fall and the cult classic and Showtime film favorite Reefer Madness! in the Spring of 2010. You can purchase season tickets or tickets for each production at http://artisticdifferences.net, as well as keep updated on the shows progress up to opening.

2006-07-31 21:53:19   Falsettos was GREAT! I encourage people to check out the Artistic Differences website for reviews. Your last chance to see it is this coming weekend. —JanelleAlvstadMattson