He was a candidate for ASUCD Senate in the Winter 2014 ASUCD Election and ran on the NOW slate. 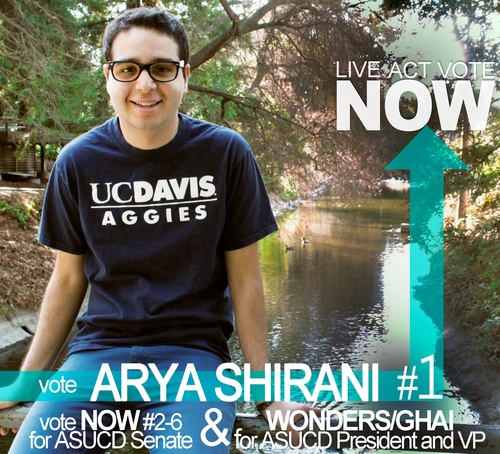 My name is Arya Shirani and I’m a third year Political Science major from Los Angeles, CA. I’m running to be your next ASUCD senator. I am an active member of Cru, Davis College Democrats, ISCAO, and the UC Davis Fencing Team.

I have two big goals and by combining my previous experience at city hall at home with my love for improvement, they are not far from completion. I am confident that as part of the NOW slate and together collectively, as students, we can improve the campus.

INCREASED LIGHTING: I want to improve lighting starting with the most frequented dark areas: Hutchison Dr, The Quad & Shields Library, and South Campus. This can be done in an environmentally friendly way with advanced LED’s and by retrofitting current fixtures to provide brighter and more focused lighting.

EMERGENCY CALL BOXES: Many schools across the country have emergency response systems similar to those found on BART trains. UC Davis lacks a significant amount of these. There are currently only a few—located in far corners of campus. It is my goal that with the cooperation of various departments we can increase the amount of these with minimal spending through student internships, projects, and grants.

STUDENT RECREATION Club Sports and Intramurals are extremely underfunded. Students should be able to take part regardless of economic status. Those in club sports currently have to spend many of what would be study hours, volunteering to raise money in addition to paying quarterly dues. I would like to be the senate advocate to Campus Recreation and Unions, representing the many on a club sport or on an IM team.

Don’t forget to vote ARYA SHIRANI #1 and NOW #2-6 for ASUCD Senate and WONDERS/GHAI for ASUCD President/ VP on Feb. 18-21 at elections.ucdavis.edu!