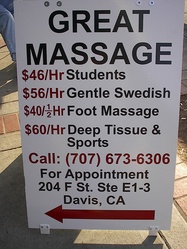 A great place in Downtown Davis, nicely decorated with water fountain, candy treats, drinks, two tables, and a very relaxing atmosphere. Will work around your busy schedule. Ask for Jennifer, she would love to have you as a new customer.

Jennifer describes her technique as, "I trained in Asia so I bring both the Asian and American techniques to the massage table. Please come for a relaxing hour. $60/hour, worth your troubles. Give me a try today".

The sign, which can be spotted outside Starbucks, mentions a student discount of $45.

2008-06-06 04:32:32   Pretty terrible massage (4/10) and after flipping on my back, lady started rubbing my private area asking "you want massagy" and it all made sense.. if she didnt look like my friends' 50 year old moms I would have less to complain about. I guess it all depends on your taste, but I wouldn't pay 50 dollars for an old lady to perform that kind of service on me. —ucdjimjim