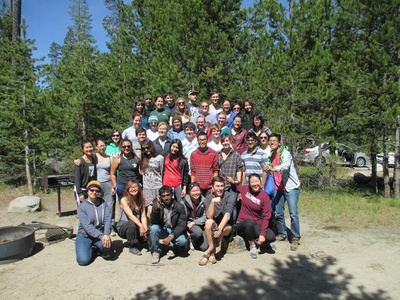 The Astronomy Club on their Spring 2014 Meeks Bay camping trip

The Astronomy Club at UC Davis loves to hold events to bring astronomy to the public. They have public viewings, star parties, and field trips to various cool places like the Lick Observatory and Mono Lake. It has been around for a long time, even prior to the existence of the student organization registrar on campus. They can often be found looking up at the sky through telescopes atop the Physics building.

Public Viewings are times when knowledgeable members of the club break out the telescopes on the roof of Physics and show anyone who comes many wonderful things like galaxies, double stars, and nebulae. These viewings are open to everyone and are held on certain Fridays from 8 to 9 pm (as announced on the Facebook page). There are "moon" nights where the moon is out, obscuring dimmer objects, so bright objects like double stars, the moon, and planets are shown. "Dark" nights are those without the moon and the objects focused on are deep sky objects generally invisible to the naked eye like galaxies and star clusters.

Are when the Astronomy Club leaves Davis for some sort of Astronomy outing. Included are things like

Yes, some of the members of the Astronomy Club are, how shall we say it, nerds who like Science Fiction. Movie Nights are where we get together with snacks and watch SciFi movies on the relatively large screen of 55 Roessler Hall. Bring some popcorn and a blanket, and watch the official Facebook page for announcements.