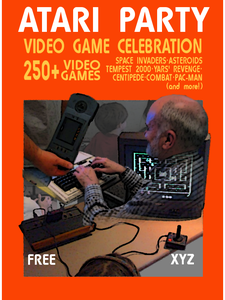 Atari Party is a free annual(-ish) event in Davis that brings together fans of classic Atari video game and computer systems (from the late 1970s through the mid-1990s). It's open to the public, and all ages are welcome. Volunteers bring systems and games from their personal collection, and set them up for attendees to play.

2016's Atari Party will take place on Saturday, July 30th! at the Davis public library, 12pm-5pm. No movie screening this time around, but there will be a ton of give-away prizes, and, of course, tons of games!

In late 2008 Bill Kendrick, local Atari nerd and recent ex-mobile-video-game developer, decided to invite friends over to enjoy some of his various Atari video game systems. Interest among his friends and acquaintances was high, and what was to be a small event in his living-room turned into a full-fledged public event.