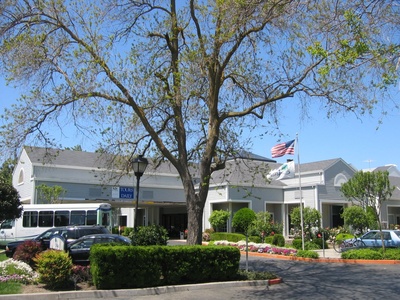 Atria Covell Gardens is a mid-level to upscale retirement and assisted living home. Atria is based out of Kentucky and operates over 120 homes all over the United States, with many locations in California. There is a memory unit that was added in 2012. "Life Guidance" offers a home to those with dementia, Alzheimer's, or other memory issues.

As of Spring 2014, the facility has undergone the task of remodeling the interior and exterior of the building and grounds. Some additions/changes include a new theater, updated lobby, bistro, a gazebo, new hair salon, and new activity room. The walls are all repainted and carpet has been replaced throughout the entire building, as well as new furniture and decor.

A protest was held by some of the Atria residents on 2007-12-21 at the Atria Covell Gardens facility. The protest was due to a proposed 8-11% rent increase for 2008. Lamar Heystek attended the protest and spoke with several of the residents afterwards. Several residents, many of whom are on fixed incomes, stated that the proposed increase would make it impossible for them to stay at the facility.

The Davis Enterprise published an article about the protest. More information about the rate increase can be found at the Improve Assisted Living website.

They have a bus for transportation.

2011-09-19 13:45:11   My mother moved into Covell gardens this past summer. There are many benefits to living there. The setting and gardens are beautiful. The staff is courteous and pleasant. The new dining room is nice. The food was good when she first moved in. After losing their chef, however, the quality has really gone downhill. The fruit is no longer plentiful and fresh as it once was. Residents are served odd combinations of food items that are difficult to eat, unfamiliar to them and unappetizing ie flank steak tacos. Lettuce is old and limp. Residents should be served well prepared comfort food that is well seasoned, tender, fresh, local, and familiar to the residents. Menus should not contain grandiose sounding items that arrive cold and unidentifiable. There is a comment box outside the dining room door which is getting lots of attention these days from the residents. —chrisdenton