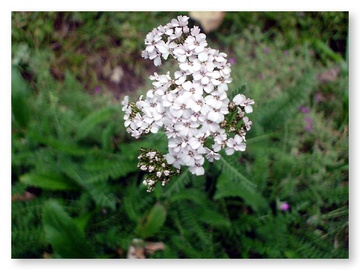 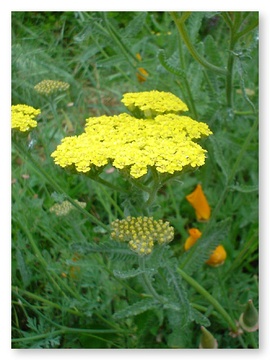 These perennial herbs within the aster family (Asteraceae) have been used for centuries in a medicinal manner, to stop bleeding, inhibiting bacterial growth, encourage healing, and to reduce inflammation. In Greek mythology Achilles (hence, Achillea) used the plant to heal the wounds of his soldiers and stop bleeding. With its strong aroma and flavor, yarrow is also used sparingly to flavor salads, soups, egg dishes, and may also be used to brew herb teas. Yarrow was also once used in brewing beer. The stalks of yarrow are dried and used in I Ching divination, and this summer when you open the doors to barbecue, use a fragrant smudge of yarrow leaves as a mosquito and insect repellent.

Several species of yarrow are grown solely for their foliage and flowers. Of the forty species within this genus, plants can be mat-forming or as tall as four-feet, and flower colors range from whites and yellows to bold pinks. All have finely divided, almost feathery leaves, and tiny flowers that form a flat-topped cluster. Common yarrow (A. millefolium) has white flowers in its native northern temperate regions of Europe and North America. Yarrow is virtually a weed, growing in fields and urban waste places, from desert to high alpine, drought resistant and still flowering throughout the summer — a perfect Davis plant! Yarrows are easy to grow, and need little care, except some grooming to remove spent flowers. In general, Achillea requires well-draining soil, a sunny location, and can become leggy if grown in rich soil or when fertilized. They can be planted spring or autumn from either seed or cuttings. They are propagated by division or cuttings in either fall or spring.