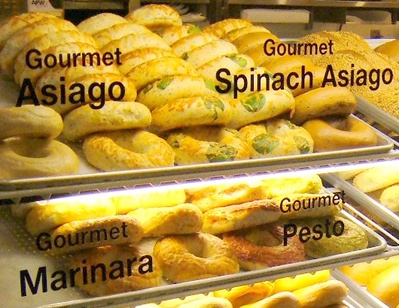 An assortment of bagels from Posh Bagel

Bagels are a delicious type of bread available in Davis. They may share the basic shape of doughnuts, but this isn't just a breakfast food. These tasty rings from Jewish cuisine are first boiled in water and then baked, giving them a wonderfully chewy texture with a hard crust. Sadly, many establishements, including Noah's Bagels do not make their bagels in the traditional manner, and instead steam or simiply bake them. Some argue that this makes the result "bagel shaped bread" not a true bagel. Some bagels are savory, with a crust of salt or herbs added, others have various types of dough - egg, whole wheat, or seeds. Whatever you're looking for, they can be eaten toasted or just as they are.

You can find them at most supermarkets, but if you're looking for a cup of coffee or tea along with a fresh toasted and split bagel, possibly with a bit of butter or cream cheese, you're probably going to one of these places:

Several restaurants that serve breakfast likely have bagels as well.

2009-06-07 14:56:36   Davis should have a locally-owned bagel place that makes REAL bagels, like those found at Los Bagels in Humboldt and the Bagelry in Santa Cruz. —TimMatthiessen

2009-06-07 18:47:22   Davis had a locally-owned bagel shop that made traditional bagels from fresh dough made daily. Unfortunately, the owner had to close, which also meant I was out of a job as the manager and baker. Not sure what Tim means by REAL bagels as I don't know how Los Bagels makes them. I don't think any bakery kettles their bagels any more, and that it one of the techniques that makes a bagel a real bagel. Unfortunately the cost of doing business was out-pacing the actual demand. Too many shortcuts and compromises are made by other bakeries to provide bagels today. It just frustrating to hear comments that Davis "should have a locally-owned place" for any business, when there are plenty of businesses here, yet shoppers choose to spend their money elsewhere. This is not sour grapes, I'm not frustrated that I lost a job fifteen years ago (although it was great work and a lot of fun, even with 10-hour days, six days a week), but that a person's shopping choice means a lot to the business owners of Davis, especially with a cyclical target of university students. The person who is able to continuously and successful target the ever-changing desires of the university students will become the most desired person in Davis. —MichaelGalli

What was the name of the place? Would you mind making a wiki page for it, for historical purposes? It'd be a neat addition if it's not already on the wiki!