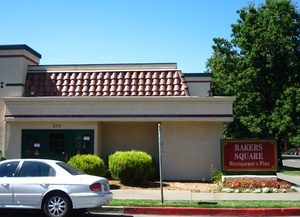 Bakers Square was a downtown fixture ever since it replaced Sambo's restaurant in 1985. The establishment was also known as "Seasons" at one point during the 1980's, not to be confused with the existing Seasons upscale restaurant. The company that owned Bakers Square went bankrupt in 2008. As a result, all California locations closed in 2009. The Davis location closed for good around 8:00PM on March 25, 2009. The Bakers Square in Davis was replaced by Black Bear Diner.

Bakers Square was a good place to grab a decent meal at a decent price. They were better than decent in the areas of pies and breakfast (served all day long), and you could generally expect good service. Dinners can be pricier, but portions are suitably larger. Their coffee was better than one would expect and features free refills. While this place was not studier-friendly, one did occasionally see people pulling it off.

A good deal was the "Rise and Shine" breakfast which used to cost $5.99. You could also substitute the hash browns/country potatoes for rice pilaf, veggies, and sometimes—a small salad. Actually, one very nice thing about this restaurant was that they were more than happy to substitute just about anything. Another meal was a big hot plate of Biscuits and Gravy, for $4.99.

Bakers Square was a great place also to have a group outing.

During Christmas 2006, somebody (or some people) unassociated with the restaurant handed out red roses with a candy cane and card attached. The card read "Practicing random acts of kindness during the holiday season", and included a $10 Bakers Square gift card. On 2006-12-18, one was handed to local radio host Jack Armstrong via a waiter.

They made terrific pies, some of which were available all the time and others which had limited availability. Their WiFi network was cutely dubbed "Wi-Pie".

The parking lot was for customers only. Over the years many students have thought that they could park in the lot "just for a while... so they could run onto campus". Their cars were towed.

I really like studying there early the days of my finals. It's generally not too noisy and it's a fun place to eat breakfast and get lots of coffee. The waitresses/waiters generally pay enough attention to me to get what I need, but leave me alone enough so I can study—I like that.—AmyLastname

2005-12-16 12:12:20   The burgers are quite tasty here, as are the fries, but they're also very expensive. I stopped eating here after they significantly raised their dinner prices. —AlexPomeranz

2006-03-19 13:34:17   Ah, good times have been had in the back dining room of bakers square. The mads can sometimes be found there after a performance. What could be better than 20 noisy high school kids in a small restaurant? Anyways, the staff is always awesome with large groups, and lets us stay even after closing time.. can't beat that.. —JulienBiewerElstob

2006-08-06 12:26:51   I've been here many times when they were terribly understaffed. Two nights ago, there was one waitress for the last shift. One man near where I was sitting was upset about this. When the man went to pay for his slices of pie, he told the manager, who was taking his money, that there weren't enough waitresses, and that while the one waitress was doing a good job, it was unfair to overwork her. The manager muttered non-committally, and he didn't even look the man in the face. This manager also moved slowly and had a sour look on his face. Bad management can make a restaurant like this one run very poorly. I like a lot of the staff and have enjoyed my time here: the food is what you'd expect, the pies and coffee are good, and our group is able to have a gathering in relative comfort, hopefully not insulting too many senior citizens with our blue tongues and dubious choices of conversation topics. —MisterProfessor

2007-03-23 16:08:56   We went here for a breakfast meeting the other day with my department and it was good! The breakfast skillet I had was yummy and the service was also good. The waitress didn't hassle us with "how's the food?" or "need anything?" evry few minutes like some places. if you come for breakfsat get the hickory skillet-mmmmm. —MyaBrn

2007-07-16 13:00:32   I really like the veggie pita, berry pie, and the coffee. Oh yes, the coffee here is very delicious. The waitress Doreen is a hoot and the price is right for good, solid food. Highly recommended. —JillBenciWoodward

2007-07-28 19:26:53   I really dislike this place. Food is bland and basic, wait staff are clearly overworked, and it just generally feels depressing. They are also very MILITANT about towing cars. I parked in their lot and ran to campus for 15 minutes and planned to return and have coffee/pie there. Well, my car was towed within 10 minutes. Do they have a ninja watching the parking lot?? After that miserable and expensive experience, I will never eat there again. —GradStudent06

2007-08-01 14:11:49   I throughly enjoy bakers square anytime I go and the good thing is their are always specials and coupons to offset the costs. Their pies are good(favorite choc silk and pumpkin pie) Great appetizers,shrimp dish is awesome, well cooked meat, service is hit or miss i have had extremely good and bad, mostly have any issue with having an empty water glass otherwise food is good —ElizabethBarthel

2007-09-22 03:43:33   The service at this place sucks. I waited and waited for a waitress to go to my table last night and when I saw a waitress go to a table that had been seated after me, I had enough. I went up to her and said she should have waited on us first, but that didn't matter now because I was tired of waiting and left. I will never ever go back to this crummy place again. —Davisguy81

2007-12-18 14:57:28   The waitresses are always very nice, but sometimes slow at refilling water and bringing checks. As for the food, it depends on the meal. The hamburgers gave me and my friend stomach aches on different occasions. The chicken pot pie has been good on some occasions, and gross on other occasions (the chicken was in huge hunks and a mix of dark and light meat). The pie is pretty good. It's a bit expensive for people who are used to cheap food, but it's nice to sit down and eat there sometimes. —Kiran

2007-12-23 15:00:53   We live right around the corner from Bakers Square & I came here for lunch one day to eat, parked my car in the parking lot, ran home to get my wallet, ran back & my car was GONE!!!! They had my car towed literally in literally 7 minutes. It cost me $250 to get my car back! When I called to talk to the manager & explain the situation, he was EXTREMELY rude to me & when I asked him if that was his policy, to tow customers cars he laughed at me, told me it was my fault & hung up! The food here is generally gross, the staff slow, & now this? I will NEVER set foot in Bakers Square again. —DavisResident23

also, while i'm not particularly a fan of many of the pies, the bread pudding is SOOOO good and a single piece is about twice as large as the square depicted in the photo.

they're pretty good about soda refills and the individual pitcher of coffee served is appreciated. —herzchen

2008-02-11 19:08:36   I parked there because during the day it is almost impossible to get a spot on my street because of all the students that park on our street to go to class! —DavisResident23

2008-02-13 18:12:54   My wife just got towed after leaving her car there in an otherwise empty parking lot for 15 minutes. Over $240 bill at the towing place which is conveniently right around the corner. What a racket! Apparently that's all Baker's Square does anymore is profit off of towing people's cars. I wonder if they even make pies anymore.

2008-02-13 18:41:10   FYI: They have installed a camera in the parking lot to catch people parking there. If you don't enter the restaurant they immediately call the towing company. The towing company is so close that you car will be gone in 15 min or less. —jackmon

2008-05-28 11:09:01   I still think this place sucks and anyone who says otherwise is probably staff trying to pick up the slowing business. Pretty much everyone I talk to agrees this place sucks and it really hinges on the staff most of all. They're slow and completely unresponsive. —Davisguy81

2008-06-20 16:34:50   Fist off, the food & prices are good. Not great, but good. The pies are always a nice treat. The servers have always been very nice to my family. A good experience all around, recommended to all. As for their parking policy... They towed me once back when I was a freshman 10+ years ago. It sucks, but hey, rules are rules. —Aaron.Curtin

2008-09-11 16:31:49   When I first went there 2 years ago, the chicken pot pie was the best thing ever! But since then, the meat has been served in big chunks rather than cut up, and it is not all white meat. The food really is overpriced, considering the quality of it. It's not terrible, but it's nothing great, and a lot of the dishes leave you with a stomach ache. The pie, however, is pretty cheap and delicious! I have never had problems with the wait staff, although sometimes it takes them ages to refill your water glass. —Kiran

2008-10-24 21:41:01   This place was good when I was about 8 and they had Mac and Cheese on the kids menu. It was all downhill from there. They also used to offer half-slices of pie, but now they don't. Just for your information, a slice of carrot cake has something like 800 calories. Seriously. —MaryLieth

2008-11-17 12:31:24   don't eat here. the WORST service ever. the waitresses here are rude and take forever. If you're a student or minority, they'll cater to everyone else before they get to you. After telling a waitress I was ready to order, she said she'll be back to take my order. After 20 minutes of patiently waiting, she still didn't come to take my order, but went to take the order of other people who came later than me first! This has happened to other people as well. oh, and the food aint all that great. —gato

2009-01-31 23:07:36   Place super-sucks, especially the staff. I went there with several international students whose English is not all perfect. Waitresses were totally annoyed and rude, food (except for some pies) was terrible. Steak: tiny and over-over done, chicken pot pie: greasy, with an artificial taste to it. A couple days ago, I left my car in an almost empty parking lot, and they called the towing company. Luckily, I got back in time, but the towing guy was already there. I paid 90 bucks while the two waitresses were watching the scene outside and laughed at me. —AmericanSweetheart

2009-03-26 14:18:34   NOOOo! This was my most favorite breakfast place, I am so sad. My boyfriend and I went almost every Sunday :( If I knew they were closing I would have went this last sunday. —Rachelottlinger

2009-03-29 16:06:16   I showed up for my regular Sunday breakfast today and was shocked to see the sign on the door. One of the few good breakfast places left in town. I've eaten at Black Bear Diners before up near Redding (and they're good), but no more pie. I'll especially miss my favorite waitress (the one who always told you to "Live it up"). I really hope she comes back when they re-open as BBD. —MichaelMacIntosh