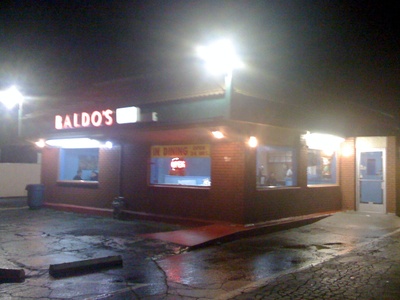 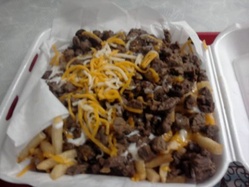 MissAmyQ: The infamous Carne Asada Fries 1,000+ calories but worth every bite!

Baldo's Mexican Food is open 24 hours and even has a drive-thru. So if you are craving Mexican food late at night this is the place to go. Their menu is quite affordable, especially if you are on a college student's budget. They have a dinner menu which runs between $7.85 to $8.95 with these plates being very very large. You can get 5 handrolled tacos for $3.85, they are served with fresh guacamole, cheese, sour cream. There is the California Burrito which goes for $5 and inside there is carne asada, french fries, and guacamole (on request). The Super Giant burrito (how does it compare in size to the Guad's?), $5, has your choice of carne asada, chicken, or shredded beef, and it has guacamole, rice, beans, sour cream. The carne asada fries, $6.75, have carne asada layered on fries with guacamole, sour cream and cheese on the top; no ingredients under 50% fat allowed! There are a host of other items on the menu such as quesidillas, all sorts of tacos such as tacos al pastor. They also serve all sorts of burritos too. They even have chimichangas. They serve fresh horchata and tamarindo. Their salsa is really good, and it's recommended to try their salsa verde. If you have to use the bathroom you'll have to go outside and around the drive through. They are quick at making food and very friendly.

If hunger hits 10 minutes earlier when you're returning from the Bay Area, there's a second location in Fairfield at 1730 West Texas St. This location is much classier, and bathrooms are decent, while the food is just as delicious.

On January 23rd, 2010, a driver crashed his car into Baldo's, and the car burst into flames. It was covered by the news at KMAX-TV. There is also video of the event on YouTube. It remodeled and reopened for business on April 1st, 2010.

2007-04-20 17:26:43   I love the super giant burrito and whenever I go I devour the burrito and end up ordering another dish. The other day me and buddy were taking shots of the salsa rojo. —MikeMele

2008-01-18 20:51:25   i absolutely love Baldos!!!! everyone from vacaville either loves or hates this place. its a bit run down (thats putting it nicely), but thats part of their charm. this place is identical to an Adalberto's, and its my understanding that it was at one time, and the reason its called baldos, was so the owner could reuse the letters from the lighted sign. —JeffIto

2010-02-10 14:13:50   It's really sad that Baldo's is closed indefinitely. The inside is a little sketchy, but if you get food to-go via the drive-through it's cheap, authentic Mexican. If you go another 10 miles West the location in Fairfield is still open 24-hours, and as the wiki says it's a much nicer place. I'd actually sit down and eat there. —bear

2010-04-22 01:11:43   Ordered the #24 Breakfast Burrito: bacon, eggs, cheese, potatoes it was amazing there was at least 8 slices of bacon in there with 6 tubs of their hot sauce! YUMM-O! Try Chicken Fries over Carne Asada Fries if you want a change. The chicken is this shredded chicken in enchilada sauce. Super good! —MissAmyQ

2011-02-07 01:17:18   Carne asada fries are good for drunk food but isnt that great tasting. Fries need to be more crispy, more guacamole is needed, and it would be nice if they had tomatoes with it too. Even though it sounds like I'm hating on the place I'm not. For 7 bucks it functions as 2 meals. The portions are HUGE. Taste = sub par. Value = Extraordinary. —David.Tran

2011-02-08 00:40:31   I went to the Fairfield location in November and was severely disappointed. I'm not sure why the wiki says this location is "much classier," but I haven't been to the Vacaville location so who knows. Anyway, when I went they refused to substitute beans for meat in the tacos... no explanation or apology offered. I ended up ordering the cheese enchiladas. They were cold and the cheese was not even melted. Pretty crappy meal. Oh, and there was a guy harassing customers (and blatantly staring at my friend and I) the whole time I was there. He was clearly not a customer and was making an number of people uncomfortable so I don't know why they didn't do something about it. —MeggoWaffle