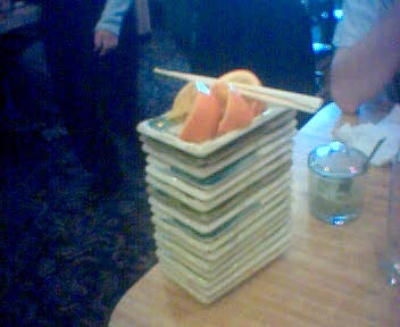 The Band-Uh Sushi Challenge is yet another tradition created by the band geeks. Step One of the Challenge is to go to Fuji's. Step Two is to eat 15 dishes of sushi. There are a few exceptions to this. Oranges are not counted, so you can't just eat a bunch of fruit, you'll probably have to eat at least some rice. Edamame (Soybeans (Those things that look like peapods)) are worth two. I think there's a limit of two dishes of edamame per time. That's it. If you succeed, the admiration of your peers and glorious adoration of millions. If you fail, the scorn of all those that you once thought loved you. And Keith will spit on your children.

This is not actually an active band tradition. In any way.

TarZxf, in shock at what he hath wrought

This is a joke, right? I've never heard of the Band-uh! Sushi Challenge and I'm IN the Band-uh! I don't even like sushi! - TF

I can eat 16 plates easy, and my friend can eat 22. This is not a challenge at all for the experienced stomach. - RobertBaron

My sister can eat 22 plates, too. I'm not saying it's not a feat or anything, because it is. - SharonZimmerman