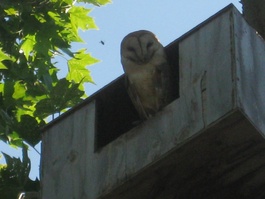 Barn owl on 4th Street next to Village Pizza and Grill. Barn owls (tyto alba) are a relatively visible owl of the Davis area. They are also the cutest, arguably, and most charismatic owl that you will see around here. If you are out at night, even in downtown, don't be surprised if you see a silent white flash above you or hear a high-pitched screech: It's just a barn owl.

Nesting box in F Street parking lot You may also have noticed the abundance of large wooden boxes in the trees around Davis. The city has been pretty active in trying to provide adequate artificial nesting cavities for this species.

In 2008, the city began placing new barn owl boxes and replacing old boxes which had fallen into disrepair after the retirement of Terry Schulz (former supervisor of the California Raptor Center) in 1991. One of the goals of the program was to help control the city's growing rodent population by encouraging the presence of the owls whose natural prey are rats and mice. Ideally, this would also lead to a reduction in the use of rodent poisons.1

The boxes were placed by the city's tree crew. The crew ended up being dismissed by City Manager, Steve Pinkerton immediately following the passage of Measure D. The future of the program is unclear. 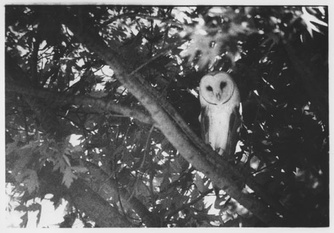 A barn owl in West Davis 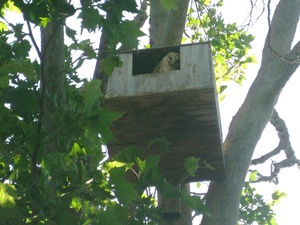 Barn owl on Fourth Street next to Village Pizza and Grill

2007-12-13 20:08:34   Late one night on my balcony, I thought I saw a seagull floating on the breeze toward me. I wondered what a gull would be doing flying solo so late at night. When it neared the balcony it circled and looked down at me...it was a Barn Owl. First time I had seen one and it was beautiful. The breeze kicked up and it floated away over the building. —DukeMcAdow