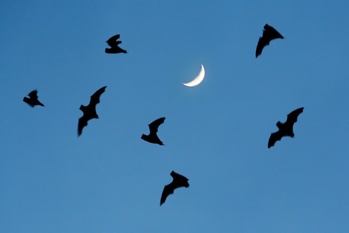 Although often mistaken for crows at night, the skies of Davis sometimes fill up with hordes of bats. These handy and très gothique insect hunters help keep Davis bug free. Next time you see wings flapping above you, look close. There are several species of bats that live in Yolo County. The large colonies living in Davis are Mexican free-tailed bats called Tadarida brasiliensis. They fly out just a few minutes after sunset.

In downtown Davis, especially in the areas with large old trees, there are Hoary bats. These are large (for California) bats which eat large nocturnal insects. You may hear them clicking and chirping BatChirps.mp3 prior to flying, after it is truly dark.

* Previous versions of this page had the taxonomic name for the Eastern Red Bat listed. Since it seems unlikely that the Eastern Red is a Davis native, the entry has been updated to specify the Western Red Bat, pending confirmation from a local bat expert.

In some other areas, bat colonies have become real spectacles for tourists. While the colonies in Davis aren't as large as some of these other cities (notably under Congress Avenue Bridge in Austin, TX where 1.5 million bats live) they do provide an exciting event to a night. Yolo Basin Foundation provides Bat Talk and Walk programs each summer to watch the bats fly out from under the Yolo Causeway.  Most of the colonies in Davis will clear out over approximately a 5 to 10 minute period each night. In this time, hundreds or even thousands of bats can be seen.

http://science.kqed.org/quest/video/science-on-the-spot-bats-beneath-us/;[Bats at the Yolo Bypass]

Protect or Exterminate Them?

Attempts to rid the town of bats have been met with much opposition at City Council meetings. The camp protecting the bats was mocked by a Davis citizen who felt that the town was more protective of bats than of its own citizens. Unsympathetic to his cause, the City Council was not amused when he put on a Batman mask to curry favor with them. There was also a successful move by some downtown businesses to remove a bat colony. (on 3rd street? anyone have more information?)

Incidentally, you have a higher chance of winning the state lottery than being bitten by a bat with rabies. The rabies danger from bats is actually much less than from other wild animals like raccoons and skunks. Rabies is passed through saliva, so do not touch a bat with bare skin.

Look out bats. Do you need help with bats in your home? Bat Conservation International explains humane "do-it-yourself" methods. http://www.batcon.org/resources/for-specific-issues/bats-in-buildings

If a bat is on the ground — do not touch it! They are wild animals and should be left alone for many reasons. Call NorCal Bats at 530-902-1918 or the California Department of Fish and Wildlife for rescue. NorCal Bats will send a volunteer to retrieve the bat, a free service that is safer for you and the bat.

If there has been skin contact with the bat, you'll need to call your health provider. If animal control retrieves the bat for you, they will have it tested for rabies. This involves killing the animal since it is the brain that must be tested, so the act of petting that cute (and wild) animal condemns it to death. Please do not touch them.

Where to See Bats in and around Davis

Educational sign in the arboretum near the California Avenue bridge 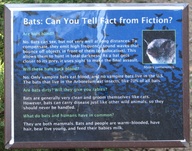 Educational sign in the arboretum near the California Avenue bridge

Over a thousand bats were found to be living in Haring Barn during it's demolition in 2002 on Campus and were moved to "a bridge in the arboretum where other Mexican free-tailed bats were roosting." In total, approximately 500 bats were added to the bridge colony, and another 500 were released. Biologists at the time also discovered large roosts living under the Interstate 80 bridges by Putah Creek.

There's a colony living beneath the pedestrian walkway over Covell, near Davis Senior High School. As of June 14th, you can see them pouring out from under the bridge at sunset. This is really a sight to see. Bats also live under the Yolo Causeway, and can be seen flying out at dusk in great clouds. Sometimes they're also found near University Mall. Woodland, as well, is especially populated with large bat colonies.

If you walk under bridges in Davis and hear squeaking noises coming from the bridge, you know it's filled with bats. The squeaking noises will reach a crescendo just before the exit for the night. In Downtown Davis, the squeaks in the trees are Hoary bats.

There are bats that live behind the Hoa Viet sign, if you look on the ground under the sign you can see the droppings.

If you are lucky your cat will bring a fully live, uninjured, but stunned bat into your apartment through the catdoor and put it on you while you are sleeping. And then you can get a nice closeup picture of a bat on your dirty kitchen floor before it finally finds it way back out into the wild. 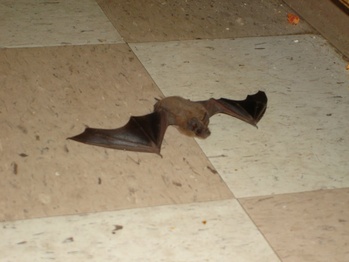 You might want to bring a rain jacket. They get so excited they pee all over when they fly out. 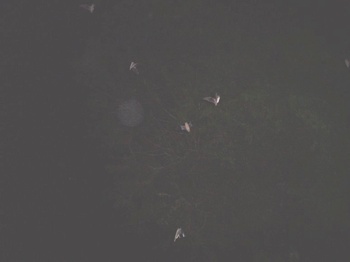 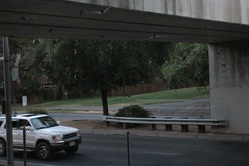 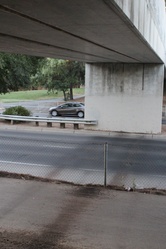 At the times (eventually) listed in these schedules, you can plan to view the bats as they exit their day-time homes. Be there promptly at the indicated time (or early) because the exoduses only last 5 to 10 minutes. Mexican Free-tailed Bats fly out at sunset, give or take 5 minutes. It varies slightly with cloud cover.

If you add times to these schedules, please be precise down to the minute so others can show up at the right time. Sunset times are chosen for the 15th of the month.

xx = migratory, not in area

2005-06-15 15:10:51   Back east we used to catch bats for fun as kids when bored. Works a lot easier in the woods then in Davis, but take a handful of gravel or pebbles/rocks, and toss a couple high up against a tree. You can trick a few bats into investigating. Good timing and a blanket can catch a couple. Be careful not to hurt them, and watch out for the teeth should you attempt this. —ES

Bats are responsible for most human cases of rabies, at least in the US (CDC ref.). Read up on this before attempting to catch any bats. —DanWillenbring

2005-06-21 11:13:09   Around here the best way to spot them is to go out at night and find a parking lot light. The lights a lot of large flying insects, which attracts the bats. Watch long enough and you will see at least one bat avail itself of these insect buffets. —RogerClark

2006-06-01 12:53:55   We went last night with the Yolo Bypass Wildlife people, it was great! There is a presentation with a slideshow and live bats at the wildlife center, followed by a caravan to the causeway for the flyout. It was really cool, and is fun for any age group! Thanks, Corky! —JeffieBaby

2006-10-23 11:15:39   When biking around Davis in the Fall, some tree or bush has white flowers, and smells strong, having an oily and musky odor around dusk (in my opinion, it smells unpleasant, and like something I'd care not to mention here). Is this a plant pollinated by bats? —MatthewTom

2006-10-30 15:07:09   All bats in the US eat insects. There are three species that also pollinate but they are only found in the far southern tip of CA and in Florida. Corky —NorCalBats

2007-02-02 15:57:37   Generally our bats in the central valley can tolerate morning sun or partial shade but not full afternoon sun. The following is a wonderful study about Central Valley bats conducted here in Yolo County. http://calag.ucop.edu/0602AMJ/pdfs/7_BatHouses.pdf —NorCalBats

2010-04-19 11:53:33   There is a small bat colony under the Pole Line Road overpass in the Sudwerks parking lot There is a seem under the bridge in the south end of the parking lot. I saw about 300 bats leave the seem a little after sunset.-Ed Whisler —edwhisler530

2010-04-19 11:59:36   So supposedly the bats aren't in the area in February? I remember going and seeing them fly away at sunset when a friend was staying with me then. —WilliamLewis

2012-06-25 21:47:17   We saw them tonight (June 25) under the Covell Pedestrian Bridge. We arrived around 8pm and they were already making tons of chirping noises in the grooves under the bridge, but we couldn't see them at all (though there are three lines of bat droppings—one for each groove—running all the way across the road. We got there way too early (didn't check the Wiki!), so it was a long an uneventful wait. They started coming out in large groups exactly at 8:45pm. This was 10 minutes after the official sunset time for today (8:35pm). The bats would wait for a time when there was a break in automobile traffic, and then a bunch of them would come out. As the next wave of traffic arrived, they'd stop coming out until the traffic passed. We watched perhaps ten or twenty waves like this before we left. I'm not sure how long we were watching—at least ten minutes—and they were still coming out when we left. The flew pretty close to our heads, and pretty close to the cars that were passing by, but they never hit anything. Definitely worth seeing—I've never seen anything like it! —JasonRohrer

2013-03-25 12:46:14   I saw somewhere between 100 and 150 huge bats fly out of the small tree just to the south of Chase in downtown at about 1:45 a.m. on March 23. It was really cool but also scary/creepy at the same time because I had never seen anything like that before. I don't even know how they all fit in there. They were really really big and that tree was small. —BrianSlininger

2013-09-06 13:41:51   Make sure your pets are up-to-date on their rabies vaccines! One of my cats was a year out-of-date when she caught a bat while she was sitting in a flower box on our second-floor balcony (they swoop pretty close to the building). The bat quickly escaped, but my cat was given a six-month "indoor quarantine" by the county because we weren't sure if she was exposed to rabies. She finished the quarantine, but I don't allow her on the balcony after sundown because I don't want her to hurt any more bats. —DukeMcAdow

2018-09-10 22:09:33   It might be worth noting that multiple downed bats on the UC Davis campus (I think about three) tested positive for rabies during the 2016-2017 school year. While most bats aren't going to carry rabies, it's important to realize that bats in this area can and do carry rabies. Make sure your pets are vaccinated and children don't play with downed bats. ~~~~ —connorology

2019-03-31 22:04:05   On two occasions within the last year I have seen a single Hoary Bat (https://en.wikipedia.org/wiki/Hoary_bat) hanging around during the day on a farm just west of Putah Creek near the Davis Airport. Here is a picture of the bat I saw today. 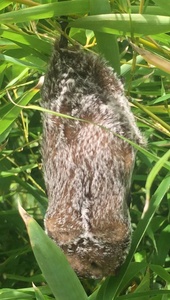