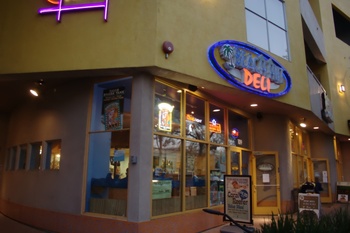 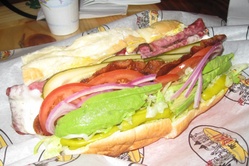 Beach Hut Deli is a restaurant that is next to Sugar Daddies and Thai Canteen on the ground floor of the Lofts. The franchise consists of 19 other locations, all in California except for one in Reno, Nevada. The surf-themed eatery offers a wide variety of gigantic, tasty sandwiches, hot and cold (with a strange fascination for cream cheese, but don't knock it until you try it) along with some sides and drinks including beer on tap and a variety bottled juices and lemonades. For the sports-minded, there are two TVs that often show some of the more obscure sports channels.

Aside from specials (see below), prices run a couple bucks higher than options like Subway, but Beach Hut gives huge piles of meat on the sandwiches (translation: grab some napkins). A "small" typically runs about $6-8, but it's a good-sized sandwich. Exact sizes vary depending on the type of bread used for the sandwiches. Mediums run up to about $11, but make for an enormous meal (the amount of meat that comes on one of their sandwiches is massive. To compare with Subway? Really? Subway gives you a tiny slice of meat and cheese. If you order double meat it still doesn't come close to this place and you end up paying about the same. —ashleyinthemist). For sandwiches made on sliced bread, the difference between a small and a medium is just the amount of meat (you get an extra inch or so piled on there). Many people get two full meals out of medium sandwiches. skinnyfatgirl relates that the pulled pork sandwich had "too much meat for my liking. i pulled out more than half of the meat filling and took it home to make 2 more sandwiches."

Wait times can run a bit long, particularly around lunch time, so make sure you've got enough time to enjoy the island atmosphere and the Frisbees they use as plates. The booths have tables shaped like surfboards. Some find them a bit on the narrow side—taller diners may wind up unwittingly playing footsies. Make sure you sit across from someone you like.

Happy Hour is everyday from 4 till closing with Rolling Rock and Coors light pints for $2 and pitchers for $8. Microbrew pints are $3, pitchers are $12. Thirsty Thursdays have $1 Rolling Rock, $4 pitchers after 4pm, and all day Sunday. Most microbrews run around $4/pint. They also have the occasional holiday special, such as $1 green beer for St. Patty's Day.

Beer Pong table is available everyday and seems to be well used. At least one concert featuring Appetite and Ellie Fortune has happened here. 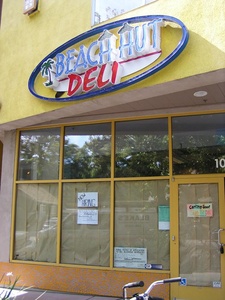 While they were being built out

Want to add something to the page? Great! You can certainly leave a comment, but why not edit the entry itself to add your point of view? It already includes the contributions of more than 45 commenters.

2011-12-10 13:46:45   If you want to sit down and wait a half hour for a sandwich...this is your place. I come here a lot because the Malibu is the best sandwich in town. The service seems to be extremely slow, even when the place seems empty, and they typically don't have any IPA on tap, but damn if that Malibu isn't delicious. —EricWecker

2012-05-17 18:08:47   Possibly the worst sandwiches in Davis. Their sandwiches cost ~$10, are loaded with Subway-quality lunch meat, and take 20+ minutes to make. The only substantial difference between Beach Hut Deli and Subway is they charge more than double and load the sandwich with copious amounts of cream cheese. Zia's is two blocks away and their sandwiches are about $6.50 and use quality ingredients, so I have no clue how this place is still in business. —TimJ

2012-11-02 01:06:28   I have never actually eaten here, but every time I walk by Beach Hut I notice the crowd to look a little rough. Makes me chuckle a bit, since the place is named Beach Hut Deli and looks to be pretty inviting. Just a random observation I have of this place... —CecilioPadilla

2014-04-01 18:12:34   I used to be a great fan of Beach Hut's and went to the downtown location frequently. This weekend, I went to their new location by Target for the first time and had a horrible experience. They made my order wrong, I brought it back & asked them to remake it. I was met with ambivalence from most of the staff, though the cashier was very apologetic. I restated my order about 4 times, but still found that they had done it wrong AGAIN. Unfortunately, I didn't discover the mistake until I had already gone home. I called to at least tell them that it was wrong and was completely blown off by the staff to whom I spoke. This entire experience was so thoroughly miserable and the treatment I received from the staff was so poor that I will never be going back. —JArt

2014-06-23 18:50:18   I have been to Beach Hut Deli a few times (once in Sac on Fair Oaks, and the rest in downtown) and the experience has been good each time. Went to the new location by Target and my food tasted really good but location is not convenient. Still a good place to get a tasty sandwich on the go if you're in the area, but not something I would go out of my way to get. —Kacarab

2014-06-24 17:21:54   I am surprised they moved to their new location from central Davis. I guess they are interested in catching the commuting lunch crowd that likely works in all the factories/offices along east 2nd street. —EricJensen