Beer pong is a drinking game played with 18oz cups and beer (usually from a keg). To play beer pong, one requires: cups, beer, a Ping-Pong or similar ball and a long table (ping-pong tables work well). There are many variations on the game of beer pong, the following are the most used rules for Davis, CA.

Beer pong is played in teams of one or two people.

The setup: Each team must place 10 cups containing a quantity of beer (usually 4 oz or so, depending on how drunk you want to get) in a triangular fashion along the baseline of the table (think bowling).

The game: Teams will alternate lobbing the Ping-Pong ball across the table, trying to get the ball into their opponents cups. If a ball lands in your cup, you must drink that beer. Once a cup is empty, it is removed from the table. Teams may ask for a re-rack when the cups can be arranged to form a triangle (6 beers), a diamond (4 beers), or a straight line (3 beers). To win, team A must eliminate all of team B's beer cups from the table by landing Ping-Pong balls in team B's cups. Once team B's cups are eliminated, team B must finish any beers remaining on team A's side of the table.

Defense strategies: Some people play defense, some do not. The most typical defense strategy is blowing — if a ball is swirling around the rim of your cup, you may blow it out.

Chaat Cafe held a beer pong tournament every Thursday at 6:30. 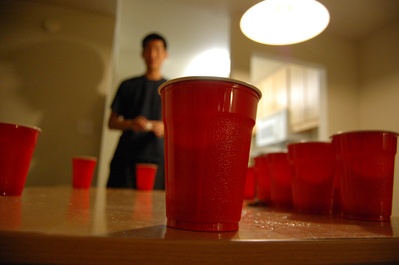