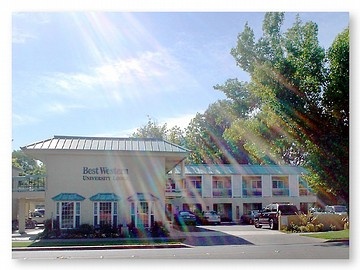 The Best Western University Lodge is, as the name implies, conveniently located near campus, though not actually on campus as some visitors may believe. They have 52 rooms, including 3 with kitchenettes. Prices here are $96 for a room with 1 queen bed, $110 for a room with 2 double beds Sunday through Thursday nights. Their rates are higher Friday and Saturday; usually $120 and $126, respectively (July 2008). On Picnic Day, Campus Preview Days, and during other events they have been known to raise their rates as high as $200 per night with a two-night minimum stay. They know the principle of supply and demand well. Check in is at 3pm, and check out at 11am.

Some of their amenities include:

When the place is full, parking can be a challenge. They seem to have a shortage of spaces and many of them are tight or have low overhead clearance. Best advice is to arrive early and walk to dinner on sold-out nights. If you don't want to walk far, Black Bear Diner is right across the street.

Payment can be made by any major credit card. The hotel is rated two diamonds by AAA, and is pet friendly with no deposit required.

The AAA discount or AARP discount will get you a 10% discount off the regular price. Card-carrying government and military employees get an even bigger discount.

Davis has another Best Western called the Best Western Palm Court Hotel. Best Westerns are independently owned and operated. For other places to stay in Davis, see Hotels.

2007-08-30 23:02:29   While it's true that this motel isn't actually on campus, it's so close that it's practically on campus; you really can't get much more convenient. Continental breakfasts aren't exactly fancy (think cold cereal, bread for toasting, some fruit, and packaged muffins in a small drafty room), but they do the job. It is a motel, so some rooms may have a fair amount of street noise. I have found the staff to be very friendly and accommodating, so if you do have a problem, they will fix it asap if they can. —CovertProfessor

2009-10-02 22:25:49   The sheets are kind of low grade. I stayed during freshman orientation; I heard a lot of partiers walking up and down B street around midnight-2 am. The staff is friendly though. —Nan

2012-10-22 17:28:13   We spent four nights here in mid-September, 2012. I'm used to the BW chain, and it met my expectations. As someone who has been away from Davis for years, I loved the location. Quick walks to the campus, to the arboretum, and to downtown. I actually thought it was perfect, and was glad I didn't stay at the BW downtown, which is more expensive since it's a BW Plus. The room was clean - a little too clean (there was always a slight residual smell of Lysol after room service). The complimentary breakfast had more variety than I expected: they have a waffle maker, hardboiled eggs, four or five kinds of toast and bagels, Activia Yogurts, Dannon-Light Yogurts, an assortment of plastic-wrapped pastries (toss them in your bag and go) as well as other pastries [varied each day], fruits, juices/coffee/tea. The fruit (and at least some of the food) is fresh: we saw a Safeway delivery van twice dropping off supplies. More importantly, they always had someone in the room, constantly replenishing supplies. A minor complaint is that they didn't put out "everything" they had; they'd restock every 10 minutes or so, so if you came back you might find a different piece of fruit or yogurt flavor or something. I didn't see a 'business center', but there was a computer with a printer in the breakfast room. There's no privacy, and one day I did try to print out a few things, which worked fine. I did see some other people waiting to use it, annoyed while kids checked their facebooks. One day a guy spent over 45 minutes on it, and was sending off tons of work emails. They don't seem to regulate it's usage, and I doubt anyone complained, though a quick check out of curiosity led to me finding a whole lot of personal and confidential documents in the 'downloads' folder.

We stayed in a single room with a queen size bed. The room did have a microwave and a minifridge, and a decently sized dresser. My partner really liked the vanity set up, and the lighting in the bathroom was nice. The noise level was completely fine, and we were close to the street. The tv was large, though the connection in my room wasn't initially great (the cable connection to the wall was loose, which I didn't notice until night 2.) It used a hygenic tv remote which I think they wiped daily. There was a small gym, as well as a hot tub that I saw some people using. My only real complaint would be the free wireless: on my laptop, I could see that there were six different channels, but they all had weak signal strength (54% was the top one, most of them were 10 to 20%). It was incredibly slow. On our smartphones we could only see the single network "Best Western Wifi" and it was nearly unusable - I ended up preferring to use my 3G connection and just charge my phone extra.

All in all, it's a Best Western. While not the most upscale, it was comfortable, clean, and the price was nice. Especially for it's convenient location. —EdWins