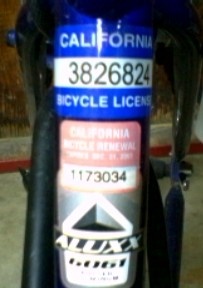 Both the City and the University share the same bicycle license program but there are differences in enforcement. Licenses can be obtained at TAPS office, and at the Farmers Market on the second Saturday of the month. Licenses cost $12, last two years, then renewals are $6 (for an extra 2 years). At one point you could renew at local bike shops, but that is no more.

The City of Davis

The University of California

From the TAPS Code:

Although the majority of Californians live in areas where California bicycle licenses are offered or even mandated by local authorities, participation in these programs is not widespread across the State — CALIFORNIA BLUEPRINT FOR BICYCLING AND WALKING section IV.C

2009-07-31 20:28:01   When I tried getting my bike licensed at Freewheeler recently, they said that the forms they had left were for renewals. There was also implication that they may not issue either once the renewal forms are gone, so I'd call first before heading over. I went from Ken's to here, then eventually to TAPS before finally getting the license. —KevinChin