Formerly "Bike Commute Week" (prior to 2006) and then Bike Commute Month, in 2008 the name was changed to "May is Bike Month" to promote bicycling for recreation and errands as well as for commuting to work and school. May is Bike Month is an annual promotion, held in May, to recognize the bicycle as a viable alternative to the automobile. May is Bike Month covers the entire Sacramento region. For those on Facebook, there is also a fan page.

Note from a former Bike Commute Week participant: This event is a great first step if you are investigating becoming car-free.

The annual breakfast, sponsored by Yolo Transportation Management Association, UC Davis and the City of Davis, has become a mainstay in Davis. This year's breakfast will be held from 7:00-9:00 AM on Wednesday, May 19, 2010 in Central Park. Each year cyclists meet at the park to share a hearty breakfast of bagels, muffins and fruit in a relaxing atmosphere. It's a great way to begin your work day! May is Bike Month T-shirts will be available for those registered to log miles.

Register now at the website. If you're not already affiliated with another organization, remember to set your team to Davis Wiki during registration and then post your name below! Check out Davis Wiki's previous years' pledges here. 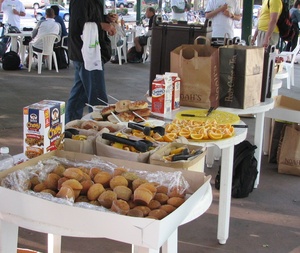 Part of the spread at the bicycle commute breakfast on May 16th, 2007

This year the City of Davis set a goal of 20,000 miles for city staff, and a community-wide goal of 120,000 miles. While this goal is double the miles ridden last year by Davis residents, it is equivalent to only 2 miles per resident for the entire month. The Sacramento region logged a total of 1,287,706 miles! Wikizens contributed 1,993 of them.

This year marked the first time the million mile goal was reached with a total of over 1,200,000 miles logged. DavisWiki riders rode a total of 1,910 miles.