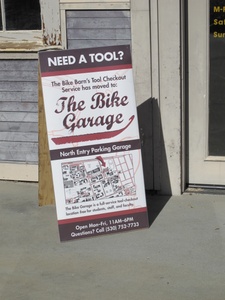 The Bike Garage is located in the North Entry Parking Structure.

The Bike Garage was established in September 2009 and has helped over 1000 customers as of March 2010. The Bike Garage provides most of the tools necessary to perform basic to advanced repairs on bicycles. This service is free to students, staff, and faculty who have a valid UC Davis Identification. However, the Bike Garage is not available for use (free or with a charge) to non-affiliated UCD persons. The Bike Garage is always staffed with at least one fully trained Bike Mechanic to assist customers with their repairs, but keep in mind that it is a "Do It Yourself" shop. The Staff member will answer questions, but not do the repair for you. We are very happy to provide this service to student's and are open to suggestions and comments as to how we can improve!

The Bike Garage is located on the main floor of the North Parking Structure by the metered parking. This is the parking structure near the Memorial Union and bus loop. To get to the Bike Garage, enter through the pedestrian entrance by the large stairway. Then look to the left, and you should see signs. There will be a large cage that is usually filled with bikes that will be on your left, and the door to the room where the Bike Garage is will be straight ahead!

When the Bike Barn was created in 1971, it was one of the country's first Do-It-Yourself bike repair centers. Between 1977, when Dennis Hearst left the position of Bike Barn Manager, and the early 2000s, the ethos of the shop slowly transformed from encouraging students to work on their own bikes and avoiding competition with local bike shops toward operation as more of a retail and service oriented establishment. When the Bike Barn underwent its last major renovation the DIY repair area was reduced to the size of a (large) closet, without any dedicated mechanic to provide support or instruction, leaving practically no public place in Davis to repair your own bicycle. In response a group of students took it upon themselves to create the Davis Bike Church, at an unused space at The Domes - their goal was to provide a low cost resource for DIY bike repair, education, and material reuse available to anyone in the Davis community. The Bike Church flourished for 4 years, growing steadily until October 2008 when the group was forced to leave campus despite their interest to work with officials to develop a formal and lasting community DIY bike repair centre on campus. As of April 2009 The Davis Bike Church moved to Downtown Davis and operates as a 501(c)(3) non-profit under a new name, the Davis Bike Collective. After this, the Bike Barn collaborated with TAPS to move the Bike Barn's ailing tool-lending space to a new dedicated DIY repair space in the MU Parking Garage - The Bike Garage. Now Davis has two fully functioning DIY bike repair centers with dedicated mechanics to get your steely steed oiled and back on the road! 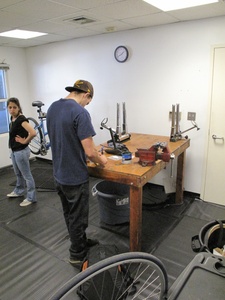 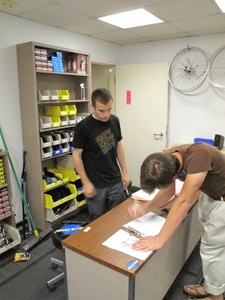 2011-03-16 10:11:37   I'm not sure if I'd classify the guys here as "dedicated mechanics". More like people with an interest in bikes but lacking the knowledge base for more in depth repairs. Great concept, but not necessarily the best place to go if you have any major issues with your bike. With the pletora of actual bike shops in Davis, there are many better qualified choices to get your bikes repaired. —Aaron.Curtin

2011-03-17 14:05:55   I'm sure many of the mechanics here are "dedicated mechanics." The Bike Barn is known for good training, and I bet that many of the mechanics there are just as good at solving bike repair problems as any shop in town. Secondly, this is place is not about repairing the most complicated new bicycle designs. It is about getting your bike back on the road for minimum cost and learning how to repair it yourself. Bicycle repair isn't rocket science. 99% of repairs are minor and don't need the most up-to-date mechanic knowing all the details of the latest Campagnolo group set. Aaron, please don't dis the DIY repair methodology or this shop, it is the right choice for many people. I'm surprised you posted this being a bicycle shop owner yourself. I'd hope you would be more supportive of these efforts. —JasonMoore

2011-03-31 11:55:09   The mechanics who work there are managers or senior mechanics at the Bike Barn. They have a large amount of knowledge about doing bike repairs. They are also instructed not to do the labor for you. It is a subset of a fully functioning shop that handles a lot of different repairs. If someone has major issues with their bike and do not know how to perform the task themselves or even where to start, then they should be taking their bike to a mechanic to have it fixed, whether it be the Bike Barn or any of the other various shops in town. —mssumerel

2011-08-07 12:46:34   This would be the first place to visit if you have a problem with a bike. The student mechanics are knowledgeable and helpful. You can ask them for their opinion on whether if it is something you can fix yourself. The best part is that it is FREE for students (not really...came out of our tuition).

I don't know what type of "major" issues you might experience with your bike as a student but majority of the time it is cheaper to replace a part/bike than paying for the labor cost to fix it. Yes, there is a lot of amazing mechanics out that can pretty much fix anything but that comes with a cost. The main reasons to why people go to bike shops for most repairs are: 1) you don't want to deal with it 2) you don't have the time for it.Bike shops are usually the quick way out.

With that said, the bike garage give student’s low cost resources that provide tools and knowledge for basic repair and maintenance.

2012-05-03 20:13:52   The place is terrible and small. There's not enough space to fix your bike with other people being right next to you. The staff behind the table was not helpful at all when I was there. She was rude and was talking on the phone and playing on the computer while I was trying to ask her a question. She kept on saying that she was not supposed to be on the phone while at work, but she continued talking anyways. Bring your bike somewhere else if you really need help because the student workers don't give crap —greenleaf

2012-07-20 01:54:59  Need to make some adjustments and are mechanically inclined but don't want to go off campus? This is the place for you. They have stuff like spoke wrenches and other specialized tools you won't find on the tool racks around campus. That said, I would suggest getting some basic tools of your own.

It's a good resource albeit with lots of broken tools (try to find a working chain breaker), somewhat inconsistent staffing (had to leave half-way through a chain replacement because the guy at the counter was late), and not a lot of space, thanks to it being used as a storage place until the end of the summer. Still, it's a good place to go if you don't have any tools and need some work done.