A large number of bike and pedestrian tunnels have been incorporated into the Davis Bike Plan to provide safe and efficient routes for bicyclists. Many bike tunnels are located along the Greenbelt and include beautiful landscaping, adding to the bike-friendly character of Davis. You can cruise leisurely through our bike tunnels or ride no hands and scream like a little school girl; either way, you will appreciate their sweet, sweet bicycle coolness. Some of the tunnels are on the UCD campus. 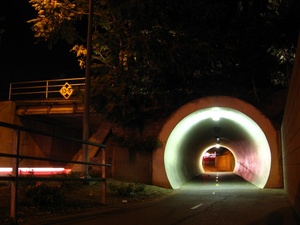 The Richards bike tunnel at night. The Richards Boulevard Bike Tunnel is an older bike tunnel in Davis, running next to Richards Blvd under the railroad tracks on the side towards the Davis Commons. In combination with the Richards—I-80 overpass, it was formerly the only route connecting South Davis and Downtown. Then the Pole Line Bridge was built. Many people considered the overpass dangerous, however, spurring the addition of the Putah Creek Bicycle Undercrossing in 2000. With more bike traffic now diverted through the undercrossing, the Richards Bike Tunnel primarily serves the Olive Drive area.

A mural entitled Color Study for Cyclists was painted in the tunnel in October 2012.

According to JoshFernandez, back in the early nineties all the Davis teenagers used to call this the butthole. —RobRoy 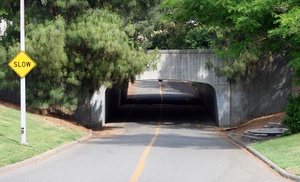 The La Rue bike tunnel is nice and big. The La Rue Road tunnel sits just south of Russell Boulevard, next to Segundo. It provides a safe, continuous bike inlet for students riding to campus from the areas around the University Mall and West Davis. It is wider than most tunnels in Davis, accommodating large flows of students. It flooded during spring break of 2011 as seen here. 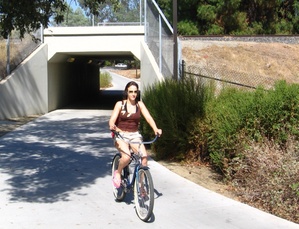 Woman navigating the train tunnel. These are a pair of bike-only tunnels along the South Davis Bike Path that connect South Davis and Downtown. The set includes an underpass below the I-80 freeway and small tunnel beneath the Union Pacific railroad. They are located at the east end of the UC Davis arboretum, just south of the the Davis Commons, and connect to Olive Drive, and Research Park Drive via West Chiles Rd. The Davis Bike Loop includes this undercrossing. 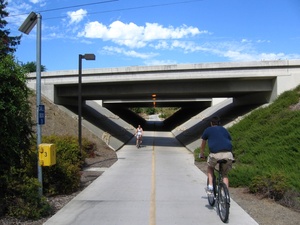 The I-80 underpass is a gigantic, dominating, angular structure. 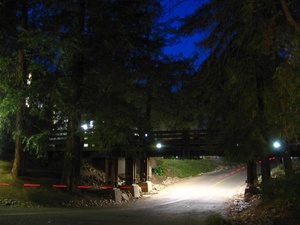 Bike lights rule! This is not exactly a tunnel but is still notable. This bridge connects Olson Hall and Shields Library on the UCD campus. While not a direct route for much walking, it has lots of shaded benches which makes it a great study spot. Constructed of redwood, the bridge was built because prior to the construction of Shields' west wing, the library entrance was directly opposite Olson. The bridge allowed pedestrians to cross and bikes to traverse without complications. An underpass was dug for bike traffic, and the bridge was put in place. While no longer frequently used by pedestrians, the bridge is now rumored to be the home of BarnabasTruman the friendly ogre. Be careful when you pass by—rumor has it that he eats a freshman each year.

The bridge/tunnel was already planned in 1971, but Wildhorse residents were concerned that the city wasn't going to get it built very quickly. They were correct to be concerned — it took 37 years. That's a lot of kids that had to cross Covell Blvd on their bikes if they wanted to bike to school. 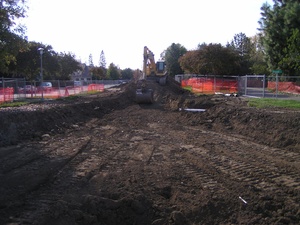 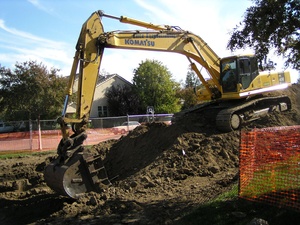 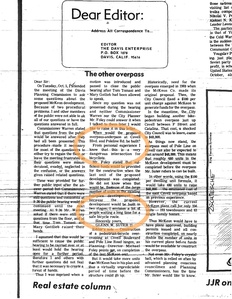 First planned in 1971 — if you want bicycle facilities, you need to keep it on the front burner! 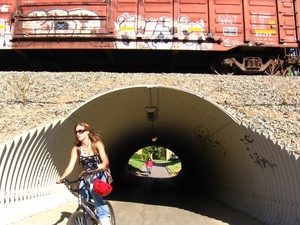 How to get around a train. This tunnel goes under the train tracks between H and J. A short bike path connects J street (through the J Street Apartments) to H street. The J street side of the tunnel is accessed by a bike path that starts just north of Drexel and winds through the apartment complex. The H street side is about a block or so south of the Covell train overpass. Best way to get across the tracks if you need to get to campus and a train is blocking your path. Be sure not to tool through this tunnel as you head west as the path makes an abrupt 90° turn at the exit of the tunnel. Happily part of the Davis Bike Loop.

Amazingly in the 3 years I went to Holmes suicidally taking that blind corner I only had problems about 3 times... —StevenDaubert 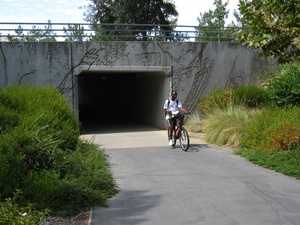 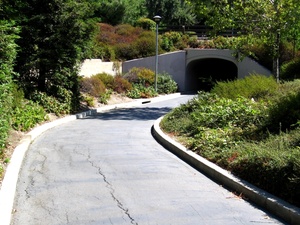 You can almost hear Bambi and Thumper frolicking about in the shrubbery. In addition to the Ancient Shadows tunnel, Playfields Park, a second tunnel to the east joins to the Rose Creek greenbelt below Cowell Blvd. 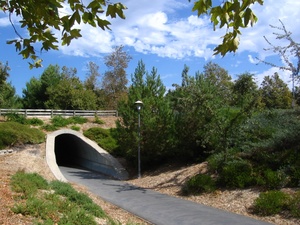 Walnut Park is home to this quintessentially picture perfect Davis bike tunnel. This tunnel sits on the north end of Walnut Park in South Davis along the Rose Creek greenbelt. 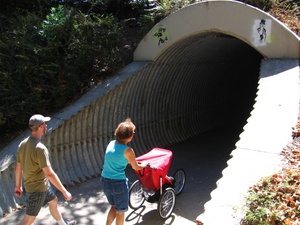 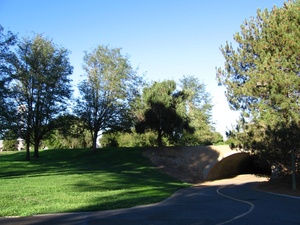 Get ready to smell the cows This tunnel connects bike paths between the Tercero Residence Halls and Aggie Stadium along La Rue Road on campus. The east portal feeds through the Dairy where you can see cows. 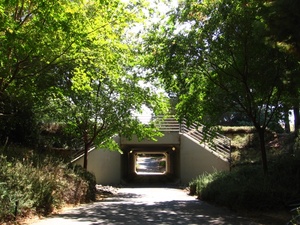 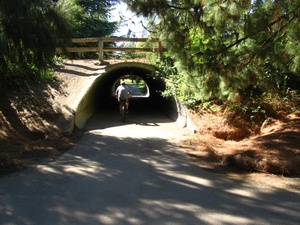 Best route to the The Marketplace. This North Davis bike tunnel passes the Covell Greenbelt below Anderson Road. 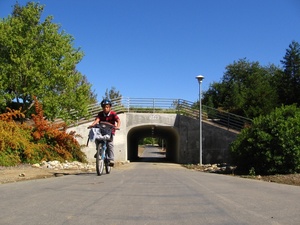 East of Arroyo Park This West Davis bike tunnel crosses below Arthur Street just south of Hampton Drive. It connects Arroyo Park and with a path to the Highway 113 overpass. It was built in 1998 and is part of the Davis Bike Loop.

This tunnel connects the short bike path that runs north of Mono Pl. with Willowcreek Park. While it serves as a safe way to cross under Ohlone St., it also is a great bypass for those who would rather avoid street riding along Cowell Blvd. between Drummond and Ohlone (providing you cut across the barren field where Albany Ave. intersects Drummond).

Help! Needs picture and description. This article might help a bit.

This tunnel connects the bike path next to Explorit to the Dave Pelz Bike Overpass by tunneling under 5th street.

The Northstar Park Tunnel to the Covell Drainage channel

It's part of the North D Greenbelts. A concrete tunnel that Runs North To South.

This Tunnel connections Covell to the North D greenbelts going under Alvarado. One side lets out near Circle Park

Watch out for the J St. bike tunnel. If you've been partaking of some libations and have forgotten your light, an extremely sharp 90 degree left or right turn is right on the other side of the tunnel, with a convenient wall in the way. A word to the wise: do not haul ass through the tunnel.

2007-09-09 20:03:10   When entering or exiting the PCB tunnel going to or from the Borders area, it's a good idea to ring your bell or honk your horn if you've got it. There's a blind turn immediately outside of the southern end, and enough people try to pass while inside the tunnel and don't see the northbound bike traffic. Another solution, of course, is to not pass while in the tunnel (or on the S-curve if travelling north); there's plenty of room (and visibility) once you're past the curve. —KevinChin

-just noting that, some months ago, the bushes on either side of the path exiting south were trimmed, thus allowing one to see oncoming traffic. I'd still watch out for people trying to pass while in the tunnel, however. —kc

2013-09-24 23:12:14   I can think of at least one person (myself), that could really benefit from a bike tunnel that circumvents the Mace Blvd bridge. It does seem like a difficult task, though, to tunnel under the highway and the train tracks, and perhaps even 2nd street and that curious little path between the tracks and 80. —TheShah

2014-07-10 16:34:49   I rode through all the tunnels above already...man I've been in this town for too long. They're fun for riding around sometime, though I never ride through some of those small ones at night time, even with my super riding speed(too dark_)who knows what leeks in the shadow, muhahahaha —Cyclonus