The Davis Biodiesel Survey was launched online in April 2007, in an effort to better understand how many local people use biodiesel, are interested in using biodiesel in the future, or would like to support the alternative fuel movement in other ways. With enough demand, it may be feasible to bring a public pump to Davis, where anyone could fill up with biodiesel fuel.

Within the first two months of online data collection, 29 Davis residents responded to the survey, and 10 are current users of biodiesel. I have heard from people interested in using biodiesel, interested in starting a local pump, interested in starting a local production operation... People have enthusiasm, connections to farmers, possibilities for funding, and I am willing to invest some time. The survey will be online through August and hopefully more people will add their input before then. Following are the initial results:

According to initial survey data, DBUG is the primary provider for 6 of the 10 users. 3 users have a Berkeley source, 1 buys from Golden Gate Petroleum directly, and another knows a local producer in Winters. The size of weekly fill-ups varies from 2 gallons per week up to 25, and the group of current users buys just over 100 gallons of biodiesel each week.

Nineteen respondents are not currently using, but seven of these would immediately start using if they had better access. Five people have diesel engines and would consider switching to biodiesel with more information and better access, and five people would consider switching to a diesel vehicle in order to join the movement. Only two respondents do not intend to use at this point.

Why aren't these interested parties using? 9 people are stymied because biodiesel is too hard to find, 7 do not have a diesel car, 3 don't have enough information about how to prepare their cars for biodiesel, 2 have new diesel cars with warranty restrictions, and 1 worries about the effects of biodiesel in car engines. 16 non-users expect that they'd make the switch within 6 months if a biodiesel pump and informational support were available in Davis.

Non-users who expect to use within 6 months if a local source opens ("potential users") were also asked about their buying preferences. Convenience and expense are more frequently reported issues for non-users, but still a large proportion would go out of their way for biodiesel (12 of 13), and would buy biodiesel even if it was less convenient (11 of 15) and more expensive (10 out of 13) than mainstream fuel.

Users and potential users who expect to use had similar opinions about using waste oils, for-profit ventures, membership dues, and the time of day that is most convenient for fueling. Following are the combined results for those questions:

~ 5 of 25 people would only buy biodiesel made from waste oil.

~ 0 of 26 people would not buy from a for-profit venture.

~ 22 of 26 people would consider paying membership dues as part of a biodiesel organization.

~ People are evenly split about whether evenings were the best time for refueling.

Assuming that prices remain near $2.90 for diesel and $3.20 for gasoline, the maximum price that current and potential users would pay fell mostly between $3.00 and $4.00 per gallon, and at these "personal maximum" prices, users would expect to buy 224 gallons per week. 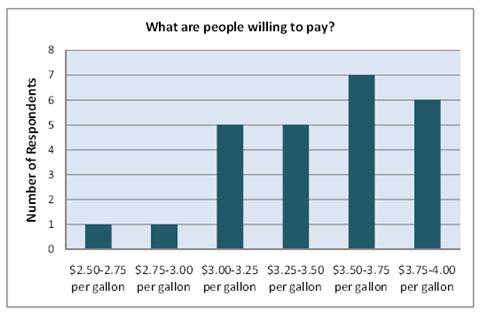 -> We could start a worker- or consumer-owned cooperative for pumping.

-> We could seek support from the Davis Food Coop and their Co-op Development Fund.

-> We could set up biodiesel deliveries to Davis from the Berkeley Biofuel Oasis.

-> We could start a for-profit local production operation.

-> We should ensure DBUG members are included in the conversation.

-> We could start a pump at old gas station.

-> We could provide assistance finding reliable cars to convert.

-> We could get more information about the Woodland Cardlot.

-> We could find a gasoline station that would consider selling biodiesel.

While I have done my best to accurately summarize all of the ideas expressed in the survey data thus far, please let me know of any errors, omissions or misinterpretations.