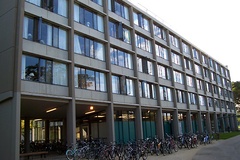 Bixby Hall, ground up. Bixby Hall is located in the Segundo housing area and is one of four residential "high rises" on campus - the one that is closest to the dining commons. Bixby Hall was named for Fred H. Bixby, a wealthy California cattleman who granted $250,000 to the College of Agriculture in 1948 to establish a program which would enable students to acquire agricultural field experience — the department of Agricultural Practices; after the college was reorganized in the 60s, this department was merged into the Internship and Career Center.

Today, the Health and Wellness LLC is located on Bixby 2. During summer '05 it was used to house parents during summer advising, as well as members of Band-Uh for their retreat. There are magnets to hold your door open, and you use your ID card to open it.

During Fall Quarter '05 there was an ant problem in many of the rooms. The following winter a television was acquired in the fourth floor lounge, but it disappeared mysteriously a couple months later. 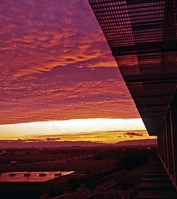 A beautiful sunset from Bixby Hall, circa 1966. 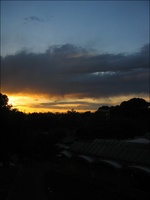 An evening sky, overlooking the Old Segundo Dining Commons from the fifth floor of Bixby

According to the Davis Enterprise, there was a fire in March '06, causing evacuation.