Like at Chipotle, you pick toppings for your food and it gets handed down the assembly line.  Blaze Pizza offers gluten-free dough (but they warn of likely cross-contamination) and vegan cheese, as well as salads, lemonade, s'more pizza, and a selection of wine and craft beer.  Expect to pay $8 or so for an 11" pie.  Calories depend on toppings; meat 'za will close in on 1,000 while all-veg will keep it nearer 600, but you can easily jam 1,200 or more on a single crust.

Jim Mizes, CEO of the company, is former CEO of Jamba Juice and Noah's Bagels. 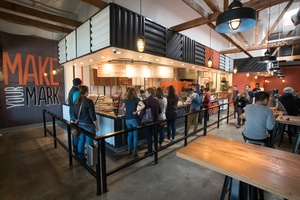 2015-12-31 18:57:06   I urge everyone to boycott this restaurant because of their vicious, senseless, ugly and unrelenting abuse of apostrophes. "Fire'd"? For realz? Whiskey tango foxtrot? Blaze's barbaric punctuating should not be allowed to stand. We must draw the line here. We must make a stand. We must let them know that this is an affront up with which we shall not put. —MichaelPlotkin