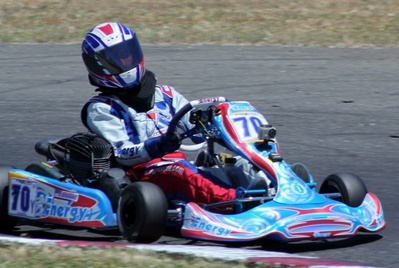 The Blue Max Kart Club is one of the oldest go-kart clubs in Northern California. It was originally designed in the 1960s as a track for mini-bikes. Now nearing the end of its fourth decade as a go-kart club, the track hosts 10 club races a year, with a visit from the Norcal Four-Stroke Racing Association, NorCal Shifters, KPX Briggs and the Vintage Karts Association. Lap times around the half-mile track range from 35 seconds in TaGs (Touch and Go's) to 50 seconds for the kid karts. The fastest classes hit above 60 mph down the front straightaway, an impressive speed for the short, narrow track. The annual membership cost is $300. One day of practice is available on non-event weekends for $20. Spectator admission for race events is $10 for adults, $6 for wee ones. Keep in mind that the club does not rent out karts, so you will need to bring your own or borrow one from a friend.

Blue Max Kart Club is a non-profit organization. Its board members meet the 2nd Thursday of every month at Sudwerk at 7pm.

The club has worked extremely hard to improve the appearance of the club. New bleachers and paddock area highlight the old facilities. The track pavement is old and rough but separates the best racers. The club is currently trying to raise the capital necessary to repair the surface, please contact the club to make donations or sponsor the improvements.

The club also features a playground for younger kids.

Go-karting is a fun, family-friendly sport. Everyone should get involved. It might not be the cheapest sport around, with the karts often costing thousands of dollars, but it is certainly the most "bang-for-the-buck."

A view of the track from the western side looking east.

2008-03-17 13:00:25   The noise pollution season is back. I find it very ironic that your web site states "located far enough out to keep from offending neighbors with the sound of kart motors." That is completely untrue. I live at least 1/2 a mile away in the city limits of Davis and all those loud engines come in loud and clear in my backyard. I feel sorry for all the people who live closer to you in Wildhorse. Enjoy your fun at the expense of others. —kelly08

2008-03-18 01:30:55   Kelly, I have been a member of the club for 3 years. The Blue Max Kart Club was way out in the boonies when it was formed, but due to population growth, houses have crept up closer to the track. It is no fault of the club that greedy developers and eager homeowners decided to put Wildhorse where it is. The club in no way should be forced out. It has established its spot in Davis. And it just so happens that this past weekend was the regional weekend where more than 400 people came to Davis for the race. That generates plenty of business in the town. —DAgee

2008-04-16 15:58:04   The track was built during the same time. Plus, do you complain about noisy and loud school children? They can make even more noise than the go-kart track and that is everyday. The go-kart noise is only a weekend thing. —DAgee

2011-07-27 16:30:36   My two cents - the track was built back in the 70's in a program led by the Davis Police Department to create a fun, family-oriented, noise park that included mini bikes, karting, a pistol range, and more. Let me repeat - a NOISE PARK! If you bought a house near a noise park, how can you complain about the noise? And as far as the noise itself goes, it is less that what the complainers say. You can hear it from a distance, but it is not loud or even at a level to annoy. The most one who lives in town can say is that they can simply hear it.

Look, go anywhere in Davis and you'll hear noises that you just get used to and don't notice any more. For example, at 5th and K where I live, the noises include the freeway, both train tracks, L street, 5th street, and especially fire and ambulance coming down 5th street, and none of them particularly quiet. Every part of Davis has its own noises. Up near Wildhorse, it is the karts, the bomb squad range, and don't forget the constant noise of road 102. I did sound level measurements out there recently and the road noise at the curb was louder than the karts at track-side, say, 50'. I also walked to the edge of town, to the nearest apartments, and the noise of the irrigation pump across the street completely swamped any kart noises and almost all of the road 102 noise.

I have come to understand that people don't complain about noise, they complain about noise they don't like, and in particular noise OTHER PEOPLE make. The neighbor that complains about the noise of me tuning my car doesn't seem to notice the much louder lawn mower nearby, for example, just like the people complaining about the track don't seem to notice the irrigation pump. People complaining about the karts are complaining about other people doing something they don't care for and don't want to be reminded about. I've also come to believe that if you are not making some noise some time, you probably are not doing anything interesting and therefore are probably not contributing anything to the community except to make it more like a place were dead people live.