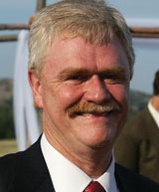 Robert N. Black ("Bob Black") served on the City Council from 4/20/1972 to 9/27/1978 and served as Mayor from 1976 to 1977. Black was a recent UC Davis student and former President of the Associated Students at UC Davis when running for City Council. Black carried the image of a rebel with his long red hair, beard and progressive policies. He was also a member of the secret society Sword and Sandals, but his cohort rebelled against the "stupid" hazing practices and refused to participate.

Bob Black graduated from San Rafael High School in 1965. While attending UC Davis Black became active in Students for a Democratic Society, an organization that brought about student unrest and protests in opposition to the Vietnam War.

Black was the ASUCD President for the 1966-1967 academic year. His campaign promises included a student run coffee shop and a bus system, both of which were accomplished by February of 1968. However, he is also remembered for signing over the ASUCD Bookstore to the administration in 1966.

He dropped out of UCD in May of 1967, but completed his term as ASUCD President with the unanimous consent of ASUCD's Legislative Assembly. After dropping out, Black traveled between Portland, San Rafael, Mexico, and a commune in Pennsylvania. Once he returned to Davis, Black helped start Natural Food Works.

Allied with Davis residents Joan Poulos and Richard S. Holdstock, Black ran for City Council. Some accused the three of operating as a slate, but they denied the charge, saying that they had common concerns but not uniform policy.

Part of the story of Black's run for the Council is told in Carol Dixon's paper, "Davis Politics 1971-72," published in the Papers on Davis History Series on the Davis Historical Society website.

That same year, ASUCD mounted a student voter registration drive that registered 7,000 new voters, with 80% being eligible to vote in City Council elections. Also on the city ballot for the election was peace initiative that called for the immediate withdrawal of U.S. forces from Vietnam.

Black is an unusual historical figure in that he was a leader of both militant activist protests on international issues and radical "constructive" change at home. Two newspaper front pages from the early 1970s demonstrate his leadership in both types of progressive movements. 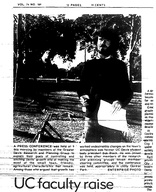 In this Sept 9, 1971 Enterprise article, Black is shown as one of the leaders of the "Greater Davis Planning and Research Group" that led the way to Davis' unique urban form. He is shown here in Central Park with his bicycle, articulating the changes that needed to be made in Davis's urban planning policy to create environmentally friendly urban form. This was a central tenent of Davis's development in the early 1970s, and has led to the compact walkable/bikeable city today. Other members of the group were Delee Beavers, Bob Ball, George Giannini and Amelia Sime — a collection of PTAers, Ag Extension folks, UCD staff. Not the type of people you expect to find closing freeways to protest wars. 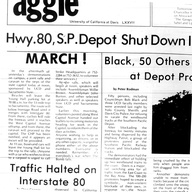 In this 1972(?) Aggie article, Black is the most prominent member of a group of 50 Davisites arrested for protesting the Vietnam war. They shut down I-80 for 20 minutes, and when dispersed by the highway patrol they shut down the Southern Pacific Railway. The Aggie covered the events in good detail, and offered clear rationale for the protests to help general readers sympathize with the cause — "Remember, it's everybody's war when the bomb falls."

In 1972 the City of Davis formed a partnership with ASUCD to expand the bus system Unitrans as general transportation. Black is often credited for helping to make this happen.

ASUCD Historian Brent Laabs considers him to be the greatest of all ASUCD Presidents. Bob Black considers himself lucky to have operated in the short time when students had a lot of influence on the University.

Black currently works as an attorney in Crescent City.

Black will be honored at the 2009 Picnic Day as a Parade Marshal.

There is a famous American anarchist who shares the name Bob Black.

April 10, 2009 Ted Buehler Bob Black is one of the most influential people in the history of Davis. Bob Sommer has commented, on the late 60s/early 70s, "Berkeley got the heat, we got the light." Black was at the epicenter of this peaceful revolution.

He presided over the town in various positions in the transition from sleepy college town to both a "radical activist college town" and a "be the change you want to see" town — a sort of peaceful civic radicalism that led to things like Village Homes, recycling programs, composting programs, energy efficiency requirements, etc. I hope someone gets him in to KDVS for a couple interviews, I'd love to hear his reflections on his radical past and what he thinks about Davis today. He is often credited for founding all a number of campus fixtures—the CoHo, possibly Unitrans, various other things I can't recall at the moment, but clearly things that UC Davis would be a much less interesting and progressive place without. What kind of leadership did it take, how much was his personal work, how much was credited to him but really done by others, and what are his thoughts on how students can make fundamental, progressive changes to campus institutions?