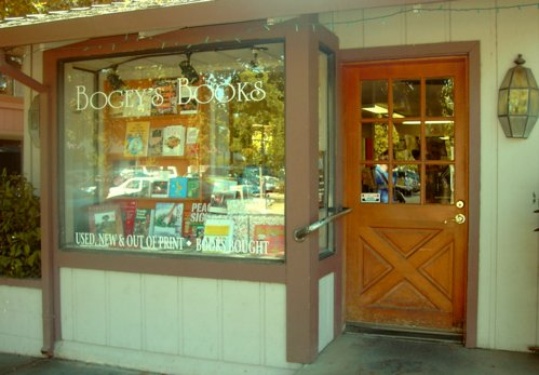 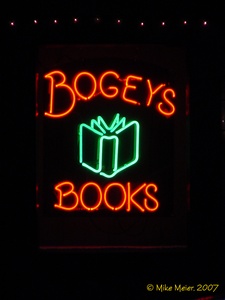 Bogey's Books ("New, Used and Out of Print Books") was a wonderful little independent bookstore located in the heart of Downtown. It closed in January 2008, after running a closing sale for a number of weeks.

Why would you go to Borders if you can find your book here? Borders doesn't even smell like books! By and large their books are cheaper than those found at Borders, largely because most of the books they carry are used. Being a used bookstore, they also buy books — every day from 10am to 3pm. They also carry some new(er) books, including fairly recent releases that have been discounted/marked down a bit from what you might find in a "new books" bookstore. In fact, Bogey's always sells below list, and if you're a member of a book club or otherwise need several copies of a book, ask about Bogey's volume discount. As an independent "used books" bookstore, Bogey's complements The Avid Reader, which carries "new books." On the display tables by the fiction shelves you'll often find lesser-known or underrated fiction works that are often quite good.

They have a surprisingly good art and history collection.

Along with just about every other independent bookseller in Davis, the owner of Bogey's books, Mark Nemmers, was quite active in fighting the establishment of Borders. The Next Chapter went so far as relocating from Davis to Woodland in direct protest of Borders' arrival. 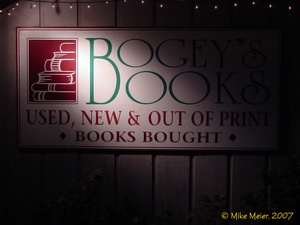 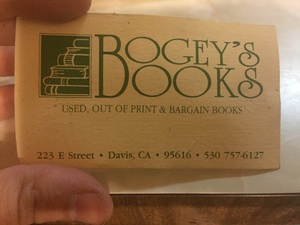 2005-11-30 21:45:26   Since 2002, Bogeys has lost at least $400 of my business because they make it hard for me to pay them. They only take cash, VISA, and MasterCard - no ATM/debit cards, and no AmEx. Even with a VISA or MC, they've declined in the past to sell me ~$15 worth of books because it was too small an amount to justify the use of the credit card. Just tonight, I changed a $44 transaction to a $31 transaction (by skipping a book) because I was $1.50 short on cash and they wouldn't take ATM or AmEx. At this point, I'm more and more likely to simply order online from Powell's. I miss Bookshop Santa Cruz! —GrahamFreeman

2005-12-22 22:22:32   The opportunity to buy books knowing that the profits will not fly off to a corporate office god knows where is too good to pass up. —KenjiYamada

2005-12-29 08:26:12   Local stores = good. Not being able to find what you want = bad. This store is great when I'm not looking for anything in particular, and horrible when I am. The selection of used fiction books is nice. —AlexPomeranz

2006-01-02 21:39:24   AmEx is expensive compared to other cards, but it is relatively cheap compared to the rates they used to charge. Notice that AmEx is popping up just about everywhere now as they scramble the get the 'ordinary joe' market share, instead of just the elitist one. But anyway, virtually al ATM cards support the Visa/MC network, so use that instead. And if you don't have one, well, that's your loss. After all, it is legal to pass on surcharges from ATM cards to customers, but not so for credit card networks. And also, there is a little bit of fuzziness whether a minimum purchase is allowed under the Visa/Mastercard contract, but many authorities are increasingly saying "no," which is why no large retailer has a minimum purchase. And honestly, at the end of the day, credit card transactions, even small ones, are less expensive in terms of labor costs than dealing with cash (if you you consider the difficulty of running reports on transactions and also the cost of losing cash). —JaimeRaba

2006-01-02 22:34   One needn't be elitist in order to appreciate quality of service. The fact that I've received consistently good service from AmEx is why I've stuck with them. But, I know from firsthand experience that AmEx is expensive from the vendor's point of view, and while I still think it makes good business sense to make it easy for your customers to pay you I can understand why small businesses often balk at AmEx's terms.

With regard to VISA/MC-tied ATM cards, I'm of the opinion that they're too risky. I'm not comfortable with the prospect of someone being able to empty my personal checking account simply by stealing my VISA/MC number. Sure, my liability is limited to $50 if I report fraudulent charges promptly, but why should I have to risk being out any amount of money, or having to deal with that situation at all? With a conventional credit card, the credit card issuer doesn't get my money until the bill is completely correct.

So, since I've had such a dramatically better experience with AmEx than with any of the four VISA/MC issuers I've dealt with, and because there are ethical alternatives (e.g. Bookshop Santa Cruz, the best locally-owned bookstore in NorCal, or Powell's Books, the best locally-owned bookstore in the Western U.S.) that are willing to accept my money on my terms, Bogey's Books is the party losing out in this situation. Since they're a local bookstore I'd like to help them succeed, but I'm not going to carry around extra cash just because one of every ten places I visit doesn't take AmEx or ATM. —GrahamFreeman

2006-01-24 16:34:35   Interesting comments from Graham. My experience with AMEX is the opposite. I think the key to good Visa/MC service is credit unions. mine is fantastic. —RocksandDirt

2006-03-26 00:25:56   Well, AmEx are being scummy in a dispute I currently have with Vonage, but otherwise they've been great for the last 7 years. I like credit unions (both as a concept and as a practical matter), but my experiences with their credit card offerings has not been positive. (Drawing from experiences with Golden 1 and Bay Federal Credit Union) —GrahamFreeman

2006-03-21 17:00:42   I would like to stick to the topic and just say that this is one of my favorite bookstores to go when you just want to browse and look up books on your 'mental list' of things to browse. I think it's a great little store. As for the credit card discussion above, I think that being the small place they are they just aren't obliged to offer this as a service and I think it only reflects how spoiled we can get as consumers. I am glad that in their own way BB's is not contributing to the credit mongers ready to sign people's lives away with interest fees. I hope they keep it people friendly like they are already! —LookyLoo

2006-03-26 00:25:56   A big part of my complaint is that, as of when I last checked, Bogey's won't take an ATM/debit card as payment unless said ATM/debit card has VISA/MC (=credit card) functionality. Isn't that actually encouraging the use of credit cards, in this case? I'd really like to be able to pay them straight out of my checking account without needing to carry cash or write a check. I would happily pay $0.20 per transaction to do so. —GrahamFreeman

2006-05-24 23:37:34   I've made some remarkable finds at Bogey's...I guess that's one of the benefits they enjoy, being the only full-time used bookshop in a college town. I've never been able to leave the store without buying something. (And they're not stingy with the Bogey's bookmarks.) Have to admit I get a kick out of eavesdropping on the clerks whenever they start testing each others' knowledge of foreign languages. —DukeMcAdow

2006-09-25 13:31:53   Yes, I forgot to mention that: Sweet Briar is also a used bookstore. Everything is either used or discounted, much like Bogey's. There are hidden treasures all over this town. —EmilyFriend

Unless a bookstore sells a lot of books to people over the internet, like Powells, there is not much need for a website. A used bookstore can reach more customers through the Advanced Book Exchange and all they need is a computer inventory. I'm not sure if Bogey's even has that, though. Also, I read in the Chronicle a while ago that Powells buys the inventory of most used bookstores that close on the West Coast, so they will probably get Bogey's if nobody buys the store. —NickSchmalenberger

2007-02-17 19:18:03   A note re: Sweet Briar books - a bit of history - they were the only bookstore to NOT protest Borders. The Next Chapter was the best act in town when they were still in Davis - incredibly knowledgable staff and high-quality books. Their store in Woodland is hard to access without a car. —JeaninePfeiffer

2007-11-06 12:07:15   I need to make a slight correction to BarryAllard's post...the reason the store is closing has less to do with the rent increase than with the owner's desire to move into a different phase of life. He's been doing this for 17.5 years and needs a change. Rent increase or not, the store would be closing. My wife and I were going to buy the shop (I've worked there since 2001) and came up against the rent increase, forcing us to back out. So, yes, it's a factor, but the landlords made their decision well after the owner had decided to sell/close the business.

As an employee of the shop, I've come to love Davis's reading community. You're some of the nicest and most intellectually curious and stimulating folks I've ever met. I'll miss seeing you in the store surrounded by all those books, all those ideas, opinions, and even the occasional tirade about something or other that happens to be in the air around us. Be well, and thanks for so many unforgettable evenings.

2007-11-25 18:43:46   I haven't been in Bogey's much...I've gone the Avid or Sweet Briar route, though for no particular reason. Well, I finally went into Bogey's now that they're closing down. I felt overwhleming sadness knowing that such a great place has existed right under my nose and now that I have discovered it, it is only a short time before it is gone forever. Damn internet driving bookstores out of business...

p.s. Bought a great Tao book by Osho. p.p.s I love the specificity in how the books are categorized. Sweet Briar has a similar method. —EliseKane

What makes you think the Internet is driving book stores out of business? Two factors I heard the cashier mention to somebody else when I was there the other night were the landlords raising the rent and the owners wanting to get out of the business. The Internet is actually helping a lot of used bookstores through sites like Advanced Book Exchange, although they can't help Bogey's because they don't have a constant computer inventory. I agree with you that they and Sweet Briar have a really good selection. Anyway, don't jump to conclusions. —NickSchmalenberger

2007-12-08 06:06:43   I was sorry when Bogey's closed, but don't forget that independent bookstores still exist in Davis. My personal favorite is Sweet Briar Books, on G Street in the same plaza as the Food Coop.

It's similar to Bogey's in a lot of ways. They buy and sell used books, and, for that reason, have incredibly low prices. I've bought paperbacks in excellent condition for only a couple of dollars.

And their selection of music CDs is incomparable—especially for lovers of jazz standards like myself. I've bought several two-disc collections there, each for under ten dollars.

So, while it's sad to see bogey's close, we Davis lovers of independent bookstores still have plenty to rejoice. —bobby.stonewaller

2009-01-02 22:15:12   Scratching my head trying to figure out what ArthurFrane was nit-picking about. At the time, Powells wouldn't take their inventory because of the market conditions. Used book stores have been closing everywhere except Russia because of online, Borders, McWally World, etc. as well. Regardless, Bogey's is missed and it's a shame people only buy what's shiniest and pushed in front of them. Support your local library. Cheers. —BarryAllard