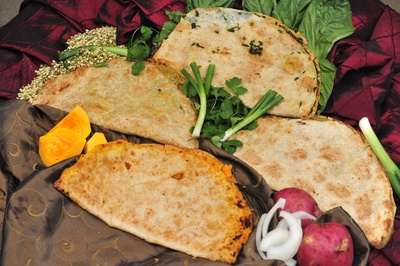 The most addictive thing to come out of Afghanistan since opium. Bolani means "filled bread" in Farsi. It is a thin flat-bread baked with vegetables in them. They are low-calorie, low-carb, low-fat, and low-sodium; but they are nutritionally dense and sustainable and can be served as a whole meal in itself. Best of all, they are deliciously addictive.

In the US, East & West Gourmet Afghan Food is the only trademarked manufacturer of Bolani. They sell at the Davis Farmers' Market.

2006-04-19 18:18:12   The dude that sells bolani and dips is awesome. I was waiting for a friend and he kept handing me sample after sample! The spinach bolani is really good. Get some! —IasriIsrin

2006-04-24 11:19:15   I tried the spinach bolani with the sun dried tomato dip and it was okay. Nothing special. It was also expensive for the amount you get and it did not fill me up. I liked it enough that I'd eat it again if someone else was paying, but I won't be purchasing any more myself. —AlexPomeranz

2007-03-28 14:25:39   One of the guys, he is the one who comes on wednesday nights his name is Mustafa (sp?) and he rocks! After I bought bolani a couple times my fiance and I became "regulars" and Mustafa would give us an extra container of this or that every time we came to the market. They will treat you really well if you buy from them and talk to them enough that they can start to recognize you. Bolani and all of the sauces are really yummy, filling, and worth the money! —ColinWard

2008-02-09 11:05:08   so many samples! indeed, the guy at the stand at farmer's market is very generous with samples (if you stand there he will keep handing you different combinations of their dips and bolani). honestly the spinach bolani is filling to me but maybe that's just me, either way i find it pretty delicious.

2008-03-20 04:59:54   They hand over the sample first and talk later. Its the best way to do business at a place like Farmer's Market. Not that I'm complaining, but I think its the free samples that drive up the price when you actually buy some. Totally worth either way. I just wish they accepted cards. —scrizer

2010-03-20 13:18:56   the first time i ran across the bolani stall at davis farmer's market, the guy whipped together a sample and as he handed it to me said "it's so good it'll make you wanna slap your mama!" i was momentarily offended, but after tasting had to agree. my girlfriend agreed as well. —boing3887

2010-07-23 12:43:11   man, these things are outrageously delicious. How these flat pieces of bread can be so tasty yet so healthy is a marvel. Unfortunately, the wallet gets a bit light after a purchase =/

The spreads are also equally good and do indeed compliment "bolani" well - not to mention being hearty, delicious spreads for other foods as well!

You should definitely buy some to support these guys. Who knows, maybe they will one day be cheaper? (I sure hope so)... —blastoff

2010-07-23 13:31:26   Man, I love Bolani. So amazing. Last time I went to the farmer's market in Livermore, there was a different guy selling it there. I told him how much I love the free samples that the guys here in Davis give out, and his reply was, "oh, man, I can beat that!" and, if possible churned out the delicious samples even faster. It's pricey, but sooooo worth it. I also recommend the larger jars of the jalapeno sauce. I forget exactly what's in it, but IMO it's the best of the sauces. And that's saying something. —TomGarberson