Bradley "Aggie Pride" Bottoms serves as the ASUCD Vice President after winning in the Winter 2013 ASUCD Election with the NOW Slate, which he created with his runningmate Carly Sandstrom.

Bradley is a political science public service and sociology organizational studies double major here at UC Davis. He previously served ASUCD Senator who ran as an independent in the Winter 2012 elctions. Bradley won this election with 585 first place votes. He has served as both the Assistant to the Vice President of ASUCD as well as a lobbyist with ASUCD's Lobby Corps. Bradley also worked as a Resident Advisor in the Segundo Area. 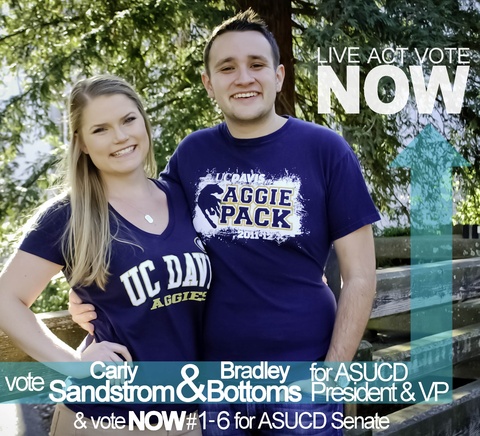 We are Carly Sandstrom and Bradley Bottoms and we want to be your next ASUCD President and Vice President! Carly has served as the External Affairs Commission Chair, Chief of Staff to ASUCD President Adam Thongsavat, and was VP of Philanthropy for Pi Phi and currently serves on the Vice Chancellor of Student Affairs Recruitment Advisory Committee, helps lead fund raising for the ASUCD Scholarship and the UC Davis Jobs Initiative. Bradley currently serves as an ASUCD Senator, is the student representative of the UCD Accreditation Steering Committee, and worked as a Resident Advisor in Segundo, was Chief of Staff to Vice President Bree Rombi, and an Advisor to the Freshmen Leadership Councils.

NOW wants to promote student interests all around our campus. We believe that college should be the best 4 years of our life and ASUCD should support our students academically, financially, and socially.

BRING AGGIES JOBS Students need jobs to pay for college and gain valuable experience. We will maximize student employment in our proposed budget by adding new student jobs . Additionally, we will continue to work with campus departments and alumni to ensure that Aggies are employed not only while attending UC Davis but also after graduation.

MAKE COLLEGE AFFORDABLE NOW AND LATER We are committed to making UC Davis accessible to students of all backgrounds. We will continue fundraising for the ASUCD Scholarship. We will work with the other Student Associations and state legislators to increase funding to the UCs.

AGGIE PRIDE PUB We will establish a place on campus that will feature popular artists in an intimate setting, that students will go to watch Aggies at away games, and where students can unwind in between classes.

KNOW WHAT YOU PAY FOR Many students are unaware of the services ASUCD provides and where their money is going. We will create a marketing unit within ASUCD to direct students to our services.

STRENGTHEN OUR NEWEST UNITS We want to expand the operations of units like Aggie Reuse, Aggie Threads, and the Pantry to ensure students are getting discounted, affordable prices for clothes, school supplies, and books right on campus.

IT’S OUR CITY, SPEAK NOW! There is an obvious disconnect between the city and the students that live here. We will fight for Picnic Day, against the Minor Alcohol Preclusion Act, and work with City Council to create a new Davis Model Lease to improve and protect student rights when leasing properties.

IMPROVE AGGIE PRIDE We want to create an environment where alumni will come back to watch football games, hire Aggies to work for their companies, donate to our programs, and proudly sport their Aggie gear. We will broaden the presence of UC Davis and improve our reputation in the Northern California region by coordinating with administration to make affordable Aggie gear widely available.

Vote SANDSTROM / BOTTOMS for PRESIDENT and VICE PRESIDENT and NOW for Senate #1-6 on February 19th - 22nd at elections.ucdavis.edu! We are excited for another opportunity to serve our student body. This campaign is for you, so please let us know how we could better serve you at [email protected] and [email protected]! 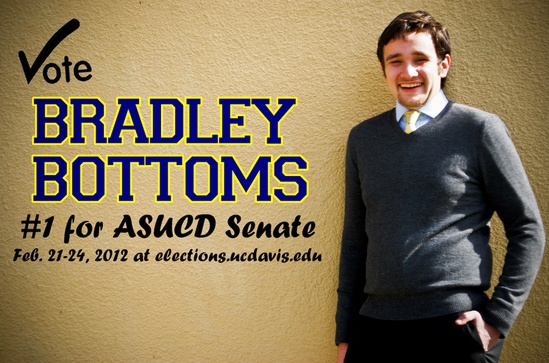 He shaved his goatee for his exec run. It was widely considered to make him look weird.

My name is Bradley Bottoms and I am a second-year political science /sociology double major from Pacifica, California. I am the former Assistant to the Vice President of ASUCD, Lobby Corps Volunteer, and am currently a Resident Advisor in Segundo.

I am running for senate for one reason, because we can do better. In this time of extreme challenge we need clear and decisive leadership, and I would like to be that advocate for students. I am tired of passiveness and I want to be the person that works hard to ensure the university, UC Regents, and state leaders understand our challenges.

There are two platforms that I would like to focus on as a senator:

The UC has been forced to increase student fees drastically over the past few years due to a state-funding deficit of over a billion dollars. There are currently talks of another 300 million dollars being cut from the UC system if a tax measure is not passed. These measures have affected students at all of the campuses forcing us to suffer the consequences of years of mismanaged funds by the state legislators. We will not take this without a response. The state government needs to know that the students of UC Davis care about these increases and are suffering from them, and I want to take action against these decisions.

1. Institute UC Davis days at the capital once a quarter to ensure the fair representation of our students. This would allow any undergraduate student to lobby elected officials in the state capital. These days would include press conferences and small group discussions with legislators and their staffs. 2. Bring legislators to our campus to show them the impact of the budget cuts as well as provide opportunities for students to have dialogues with legislators. These days would include tours of campus and resources such as the ASUCD Pantry to show the level of support needed by students resulting from fee increases. This event will also include town hall style meetings to allow for dialogues between legislators and students regarding student interest issues.

You know what I am talking about; those people who swerve all over the bike lane, or that person who is responsible for that bike related scar on your arm. This campus is full of people that just do not know how to ride their bikes. I want to ensure that this campus is safer and generally a better place for cyclists, in several pragmatic ways. 1. Work with Student Housing and the Police Department to include a comprehensive bike education program at Orientation. 2. Work with the Police Department to make the bike enforcement process more educational. 3. Provide bike skill classes for all levels of cyclists, from how to ride a bike to advance mountain biking. 4. Widely distribute bike maps and other sort of information to students