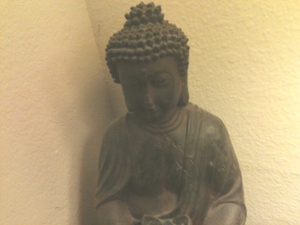 Buddhist statuette found in a Davis home. Buddhism is based on the teachings of the Buddha, Siddhartha Gautama. It is typically divided into two main branches: Theravada Buddhism and Mahayana Buddhism. Although the teachings of Gautama Buddha are respected in most forms of Buddhism, his teachings have a less central role in several of the later Mahayana movements. One goal of Buddhist practice is to end the cycle of rebirth through realization of true reality or nirvana. Theravada Buddhists believe in a monastic ideal in which nirvana is true peace that is best found by meditating while observing strict moral precepts and behavioral codes; the role of most lay Theravada Buddhists is therefore to support the sangha, the community of monks and nuns, and to do good works in order to acquire merit and reduce suffering. Alternatively, many Mahayana Buddhists have downplayed the necessity to strictly follow the ancient monastic ideal.

Although the main Mahayana and Theravada branches have the most followers throughout the world, a third path known as Vajrayana, is very popular in Davis. Often associated with Tibet, Vajrayana is also known as Tantric Buddhism. This form of Buddhism typically emphasizes the importance of having an experienced teacher. Many of its teachings are considered esoteric, or secret, in that they are only transmitted when the student is deemed ready. In these respects, Vajrayana shares some similarities to Mahayana Zen (Chan) Buddhism. It should also be noted that Tibetan Buddhists who follow Vajrayana generally consider their beliefs and practices to be a form of Mahayana Buddhism.

Some describe early Buddhism as a philosophy rather than a religion because it places no special importance on a single or multiple god-like beings. However, this point is a bit complicated by some later Mahayana teachings in which buddhas are depicted as immortal and powerful beyond death. Although buddhas are not generally supposed to be worshiped like gods, in some places it is common for followers to chant their names and revere them in sacred art forms.

The oldest forms of Buddhism (and several of the newer ones) downplay the importance of intellectualism and thought in general. Originally, Buddhism was an experientially-based practice rooted in meditation with general guidelines and warnings set by the Buddha. The importance of philosophy and logical discourse was limited to the goal of attracting people to meditation and the lifestyle known as the Middle Way. In this system, true transcendence cannot be accurately described in rational terms but only alluded to.

Davis' first Chinese restaurant, Honorable Gee's was well-known for its gigantic Buddha statue outside of the building.

KetMoRee Thai restaurant has a life-size statue of a kinnari, a half-woman, half-bird creature from Buddhist mythology.

Buddhism in the Modern World is a UC Davis campus club that meets to study and discuss Nichiren Buddhism. It is affiliated with Soka Gakkai International.

Theravada Buddhists tend to focus primarily on what they believe are the core teachings of the historical Buddha, Siddhartha Gautama. They tend to disregard the authenticity of many texts that seem to go beyond the Buddha's basic messages, thereby disputing the notion that some teachings were purposely withheld to some and only transmitted to certain students who were deemed ready. Lay Theravada Buddhists in most Asian countries feel a strong obligation to support the monastic community to the best of their ability in terms of providing food and other resources. In much of the United States including Davis, there is often no local Theravada monastery to support, and so this sense of obligation is often absent or less emphasized.

A Theravada-oriented Davis Insight Group meets weekly at the Unitarian Universalist Church of Davis for meditation and study.

The four main branches of Tibetan Buddhism are Kagyu, Nyingma, Sakya, and Gelug. The one most familiar to Westerners is Gelug because it is the Dalai Lama's school.

There are a few organizations in Davis that teach Tibetan meditation and/or tantric practices. The Diamond Way Buddhist Group follows the Kagyu tradition of Tibet. The Davis Shambhala Meditation Center teaches a modern, combined form of Kagyu and Nyingma known as Shambhala Buddhism. The Davis Dharmata Sangha is a Tibetan Buddhist group that also appears to have at least some connection to the Kagyu and Nyingma lineages. Representing the Gelug school, there is the Asian Classics Institute of Davis. The organization does not currently have its own building, but it has thus far offered yoga/meditation instruction and general educational courses at Davis Holistic Health Center. The Sakya school is  represented in Davis by the Sakya Lineage of Tibetan Buddhism in Davis.

Tibet Nepal is a Davis store that sells Tibetan Buddhist materials such as prayer flags, incense, singing bowls, statuettes, and books. Himalaya Gifts is another store that deals in Tibetan products.

Zen Buddhism is a Mahayana school of Buddhism that is believed to have been originally popularized in China by the Indian monk Bodhidharma. Although known in China as Chan, it is more recognizable in the USA by its Japanese name, Zen. Zen tends to particularly deemphasize the notion that intellect has importance in liberation, favoring direct experience and the simplicity of meditative existence. The point of a Zen koan riddle, for example, has more to do with suspending "rational" thought than finding a logical answer. The formal practice of Zen is usually seen as sitting meditation, although some groups deemphasize the importance of sitting as well. In China, this form of Buddhism is often associated with martial arts, and in particular, Shaolin Kung Fu.

The Bird Path Zen Community of Davis is a lay organization that meets for weekly group meditation, informal study sessions, and social events. Their practices are primarily influenced by the Rinzai and Soto sects of Zen Buddhism.

Fresh Breeze Sangha is a lay sangha (practice community) that sits in the tradition of Thich Nhat Hanh/Plum Village. Their weekly sits offer practices of sitting meditation and walking meditation plus investigations into practical applications of Buddhism to daily life situations. Their practices originate in Vietnamese Zen which has roots in Chinese Chan (Zen).