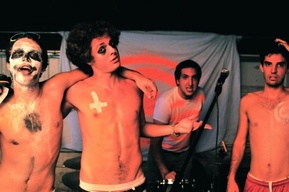 Build Target at a show on Halloween

Comprised entirely of UC Davis students, Build Target in Steve Souza's Backyard formed in Spring of 2009 to answer one question: how many DJs does it take to screw in a lightbulb? The answer, they soon found, led them to a form of songwriting and stage presence that more closely resembles a DJ set than a list of rock songs. In a time when the line between rockstar and DJ is becoming more obscured by the day, Build Target has come along to figure out exactly where that line begins and ends, and how to exploit it. The name is both a salute to their college hometown and a banner for their undying investment in local politics. In September of 2009, the four members of Build Target recorded their first EP, entitled Heavenly Man Date, and played their first show in the warm murk of a Davis garage. The following week, a Target was erected in Davis. They are still trying to figure out if this is a victory or a loss.

Build Target have played various shows around the Davis and Sacramento area, including Luigi's Fungarden, Club Colgate, as well as a number of house parties (all of which were pretty wicked).

JabberWokky thinks this might be the greatest name for a local band outside of "Build Target in Steve Souza's Mustache".