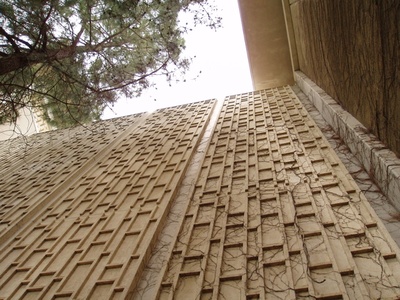 Storer Hall is a possible place to builder on Campus- at your own risk.

Buildering is the practice of climbing the outside of buildings or manmade structures. Buildering is extremely dangerous. Climbing usually involves ropes and safety protection when one gets over a few feet above ground. But protection is relatively rare in buildering. It also is quite often illegal and thus is commonly done at night to reduce the risk of attracting the authorities.

* By far the coolest of any buildering sites is the Social Science and Humanities (UCD Death Star) building on UCD. Every roof can be reached, there are problems all over the place, and the roofs are some of he highest in town, allowing views for miles and beautiful star gazing. The most fun problems are getting past the locked glass doors on the elevator towers. * Young Hall has a series of pipes and shelves and windows to climb on the east side. Plenty of cool things up top, and the roof door is usually unlocked.... * The Outdoor Adventures building has a few climbing holds bolted to the outside to give you a start.

Have explored said rumor. There are ways around the cameras, and the crime of climbing a roof isn't worth them going through the process of identifying a criminal from back footage and processing charges etc. Late night custodialism is a much more present threat. —StephenHudson

- Easiest way is on the south end, climb the stairs next to the coho entrance, and just walk over that roof leading east, my friend did this with a broken leg. Also, if you go left instead, you can hop onto the glass coho roof, or hop the wall at the end of the eating area and hide in an enclosed air conditioning unit.

2005-02-15 13:42:02   I've heard rumors that the Rec hall and at least one other building on campus have (or at least at one time had) bolts attached. Though I never personally ever found any bolts. —JevanGray

2010-03-16 01:37:06   Both Nugget markets are climbable - the South Davis one has a ladder up the back (with an easily by-passable cover) and the Covell one has a small shed and series of pipes up the back. This page is in need of some serious revision. —THernandez