The California Aggie, via The Davis Enterprise, prints 8,000 to 10,000 copies every school day.

In 2005, circulation was 13,000, causing some to believe that California Aggie over-publishes a significant amount of copies each day. They claim R4 Recycling can show this. Some also claim an internal audit of The California Aggie showed they over-print, but it is unclear whether any such audit ever took place. When asked, then-Editor in Chief Ryan P. Fuller claimed he had never heard of any internal audit and that he had never seen a report from R4 Recycling. It unknown whether either of these ever took place. The topic was addressed in former ASUCD President Kalen Gallagher's farewell speech. Below is a letter sent to the individuals addressed, it has been copied here for public information:

I've gotten wind of some legislation that Environmental Planning and Policy Commission may be writing regarding The California Aggie's circulation.

I'm writing to remind you that while The California Aggie is part of ASUCD, neither the Senate nor the Executive Office has control over how The Aggie is managed. This includes editorial and advertising content, as well as our distribution.

Furthermore, I will not recognize any ASUCD legislation that attempts to cut The Aggie's circulation.

I've also heard about a group (I'm not mentioning its name) that is planning to take copies of The Aggie in recycle bins to our advertisers. I understand that some of the senators know who these individuals are. I will report any theft (that is, the removal of a significant amount of the papers) to the campus police department.

As of 2005-05-11, no one has seen any proof that there was any such R4 Recycling study done, or any internal audit of The California Aggie. Some have, however, collected leftover Aggies (questionably legal) in an attempt to bring attention to the possible over-printing (seen below).

A lot of the recycled Aggies can be found near Kerr Hall in several extremely large recycling bins.

How it boiled out 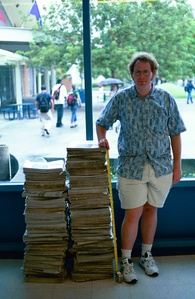 Brent Laabs poses next to the Aggies he collected in an evening.

During the week of May 2nd, 2005, several members of Students for an Orwellian Society went around campus and collected old Aggies that had been left in stands. This allegedly took place at about 10PM. During a day of collection they obtained approximately 2000 aggies (pictured right). Brent Laabs (of Students for an Orwellian Society) brought the collected aggies to the Campus Media Board and expressed his dismay about aggie distribution processes. Then-Editor-in-chief Ryan P. Fuller quickly responded that The California Aggie was open to changing and examining their distribution system, and does work with R4 Recycling as much as they can. Ryan P. Fuller also expressed concern about the collection of left-over Aggies from stands, citing it as a violation of Fair Use. Brent Laabs responded to this by accusing the Aggie of committing fraud by misreporting their circulation numbers to their advertisers. The Campus Media Board questioned Ryan P. Fuller on the matter, and he reassured them this was a priority for the Aggie.

On May 5th, 2005, the ASUCD Senate passed a resolution encouraging on-campus publications to work closely with R4 Recycling to reduce their waste. (Resolutions differ from bills. Bills 'are' legislation and can order/allocate, etc. Resolutions are sort of tokens, ways to express something, or ways to formally ask someone to do something [but not force them to]).

It's not stealing if the copies are removed from the recycle bins is it? —JackHaskel

Ryan P. Fuller is correct. Only the Campus Media Board has authority to tell The California Aggie what to do. (I think.)

In the public Editorial Board meeting the question of aggie over-printing was discussed, and Ryan P. Fuller said that the Aggie had done an internal audit and it showed they didn't need to reduce printing? I demand more information! —PhilipNeustrom

Actually I'd like to remind everyone not to take anything for granted unless there is evidence of it — in this case, I'd say there's no reason to say Only the Campus Media Board has authority to tell The California Aggie what to do. unless someone can cite a place in the ASUCD bylaws where it says as much. Personally I'm not going to rule out it doesn't, and am of course open to arguments either way, but I'd just like to remind everyone to avoid running on assumptions. -KrisFricke

Very interesting Mr. Chief Justice... I just ran through all the codes and never saw anything that would make the Aggie any more autonomous than the CoHo. At best, there's the unit's admin plan, something that could be changed (or overruled) by a mere majority vote. Anyone down for turning the Aggie into the ASUCD California Aggie? Let the propaganda begin! (just kidding- but maybe someone who doesnt like it this way would look into writing a constitutional ammendment to ensure autonomy in the future? ie. a fourth branch of sorts...) -ThomasLloyd

So, does anyone think forwarding this letter to the Aggie's advertisers is a bad idea? —BrentLaabs

Wow. Let me clear some things up about what the EPPC is doing. We are authoring a Resolution that would give ASUCD Senate support against overprinting of ALL on-campus publications. For some reason, everyone gets excited about singling out the The California Aggie when it comes to overprinting. If you really care about the issue, you would be targeting even greater offenders. Also, please do not remove any Aggies from the paper bins. It is illegal, and it does not help anything. Take pictures if you feel inspired, but do not remove any recycling. R4 Recycling and the Aggie work with eachother every year to work on the issue of overprinting. That's more than I can say for other on-campus publications. In addition, the Aggie recycles all of the remaining Aggies from the prior day in bins that are designated by R4 to do so. Again, this action takes greater environmental responsibility than other on-campus publications do. Since all of the Aggies are taken to a single recycling location, it is easy to see what is overprinted by the Aggie. Unfortunately, it is not as easy for the common student to see how much other overprinting is happening on-campus since R4 does not have designated recycling sites in place for all overprinters. This legislation will be used by R4 to assist them in their continuous efforts to reduce ALL overprinting on-campus. If you are genuinely interested in resolving this problem, I suggest you contact R4 and ask about ways that you can help.—NancyMathison

I dunno. This is a typical UCD move: try to compel something (or a whole class of people) by terrorizing someone into it. Wouldn't it be better to work with the groups in question first, rather than twisting their arms? As the former Editor-in-Chief of the King Hall Advocate, we routinely found large amounts of copies thrown in the recycle bins (or just plain trash bins), while they were still current. While, as a daily, I suppose the Aggie is less likely to be a victim of this, I think the Aggie's problem is not overproduction, but rather poor distribution. Several distribution points are dry by early morning, whereas other points never seem to be have many copies taken. So perhaps a study of the distrubition trends can make it more effective. —jr

Can someone provide a copy of the R4 Recycling study? Seems that this would be a case where access to the raw data would be helpful. Also if the internal audit is publicly available that would be helpful as well. —JasonAller

2005-07-13 17:30:36   I am proud to say that this past year I have spent working with Building Roles and as the Advertising Manager of the California Aggie Newspaper. For a group that talks about community growth and development, most of the time you choose to spit on your competition for doing a good job before seeking out the facts. Do any of you honestly think that Kaplan was against the wiki and for Building Roles because we are better looking then you? Do you really think the aggie actually lies to customers on how many papers we print? Read what is written on these pages, it might tell you something about how serious Kaplan could take a site like this. While I like the idea of a site like this, you need to learn to accept other peoples successes gracefully. I would love for any of you to become a part of building roles and see way Kaplan and U.C. Davis believes in us. —DustinDevan

2005-07-14 17:05:17   You have never met me whoever called me an a$$hole. You were to busy collecting old papers to do the simple thing and talk to the person with all the numbers. The one thing I never undrstood is why did you guys ever care about how many papers we publish or how we distribute. Is your life really that boring that you need to occupy your time with such pointless endeavors. The california aggie is a service that students can enjoy and benifit from. Unlike this site, it publishes all points of views without craping on them. You know what I think is funny. Most of the people on this site spend so much time complaining about so called violations and rule offenses trying to hold people responsible (ie camping in the dorms). But when RobRoy makes an election violation you people did a 360. Its pretty sad when people can't hold themselves to the same level of integrity that they are trying to hold others to. —DustinDevan

2005-07-14 17:34:40   I have to agree with Arlen. Instead of attacking you, I am going to follow up on your invitation to attend Building Roles. Since I am the marketing/publicity person for my club, I should have a lot in common with you. —BrentLaabs

2005-07-14 19:05:53   maybe you should have followed up on my invitation to talk about the aggie that I made to you before you took the paper before you went your stupid quest to steal papers —DustinDevan

I never said anything was shit. What are you talking about? The reason he took the papers was not to recycle but because he wanted to prove a point. I even asked Brent on the phone before he took the papers if I could answer any questions involving the aggie publishing. But he didn't want to do it the easy way. For the record, the aggie does NOT over publish the paper. There are business and logistical needs for the 13,000 papers we put out a day.

Kalen is an idiot that made something up and I am not a member of the media. At all papers, there are divisions between editorial and business. Sorry, but that is common knowledge. Nothing you could have said to me could have been printed. If you feel everytime some moron steps to the mic and says something it warrants an investigation you are going to spend a lot of your time chasing down crap. The aggie has been publishing 13,000 papers since the mid 80's. If we were committing fraud, we would have been exposed already. You were just looking for something to make your self feel important and that is sad. I think its kinda of arrogant of you to try to attack an institution that has been around since 1915. Go join the ACLU if you want to make drastic pointless change. Most people have better things to do with there lives -DustinDeVan

I apologize for that statment. Got carried away. The I have agreed and disagreed with some of the things the ACLU has done. Nevertheless, they are a valuable organization — DustinDeVan