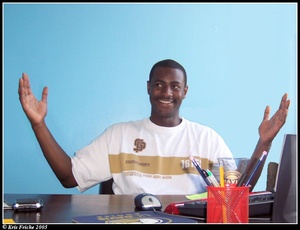 Caliph was known to have open arms for his constituents

Caliph Assagai was the ASUCD President during the 2005-2006 term and his Vice President was Darnell Holloway and his ASUCD Controller was Devin Whitney. Caliph was also an ASUCD Senator from Fall 2003 to Fall 2004. He was on the student slate L.E.A.D.. He grew up in Sacramento and attended McClatchy High School, and his father, Mel Assagai, is a successful lobbyist.

While President, Assagai oversaw the creation of the Campus Center for the Environment and the Campus Outreach and Organizing Office. Assagai also speared headed the effort to create the Davis "Good Neighbor Policy," now called "Neighbors Night Out", and he was the creator of the "City-Campus Entertainment Partnership." 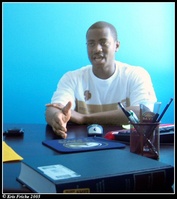 On March 9th, 2006, sitting mayor of Davis, Ruth Asmundson, declared March Ninth "Caliph Assagai Day in the city of Davis." Ruth also said she and Caliph are great friends, and then followed it by saying she has met him twice. Caliph did not comment on whether or not he reciprocates Ruth's friendly feelings although he did appear excited about having a day named after him.

In Spring 2006 he was recognized by the Sacramento Observer as being one of Northern California's "Top 30 under 30".

Caliph graduated from UC Davis in June 2006. Beginning in October 2006, he served as a California Senate Fellow in the Office of Senator Leland Y. Yee, Ph.D. (ASUCD's Legislator of the Year). He resided for a time in Washington, DC, where he served as a fellow with the California Institute for Federal Policy Research. He entered UCLA Law school in Fall of 2009.